For centuries, migrants and traders travelled between the Indian subcontinent and South-east Asia, enriching both their regions.

As leaders of all 10 Asean nations gathered here for a landmark meeting with India yesterday, Prime Minister Narendra Modi harked back to history and called for deeper maritime links and closer cooperation in security as well as technology between India and Asean .

This friendship has been nurtured by a cultural connection, he noted. "Our shared voyage goes back thousands of years. The Ramayana, the ancient Indian epic, continues to be a valuable shared legacy in Asean and the Indian subcontinent," he said.

"Buddhism also binds us closely. Islam in many parts of South-east Asia has a distinctive Indian connection going back several centuries," he added at the Asean-India Commemorative Summit to mark 25 years of ties between both sides.

Mr Modi, who hosted the summit, has also invited the leaders of all 10 Asean countries as chief guests for India's Republic Day parade today.

Yesterday, he underlined their common interest in a peaceful region. "India shares Asean's vision for peace and prosperity through a rules-based order for the oceans and seas. And respect for international law, notably Unclos, is critical for this," he said, referring to the United Nations Convention on the Law of the Sea.

He added that maritime cooperation and security is a key issue for both regions, and was the focus of discussions at a leaders' retreat earlier in the day at the Rash-trapati Bhavan, the President's palatial residence. 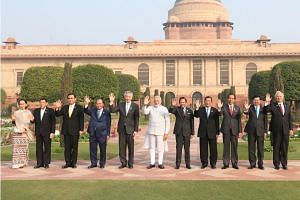 Asean and India: 25 years and beyond

Outlining proposals to deepen ties with Asean, Mr Modi said India would undertake a pilot project on rural connectivity to create "digital villages" in Cambodia, Laos, Myanmar and Vietnam, saying this could be replicated in other countries.

"Information and communication technology will forge new bonds of digital connectivity among us," he said.

He also announced 1,000 fellowships for students and researchers to the renowned Indian Institutes of Technology, and proposed that 2019 be declared the "Asean-India Year of Tourism".

Mr Modi has sought to boost India's ties with South-east Asia since he took office in 2014, and renamed the country's Look East policy as an Act East policy.

Ms Preeti Saran, Secretary (East) in India's Ministry of External Affairs, told a press briefing that "Asean is at the fulcrum of India's Act East policy".

On Wednesday, External Affairs Minister Sushma Swaraj launched an India-Asean friendship park in the capital, noting that it symbolises the friendship between India and Asean, and demonstrates both sides' commitment to protecting the environment.