Chinese President Xi Jinping pledged to follow the path of peaceful development yesterday as his country commemorated the 70th anniversary of the end of World War II in Asia, but the chatter that followed was all about the military prowess on display.

The parade appeared to send messages to both external and internal audiences, and to be aimed at consolidating Mr Xi's power and the Communist Party's rule as well as China's standing in the world.

Concerns that Mr Xi would use the event to humiliate Japan were forgotten as an assortment of tanks and missiles rolled along Changan Avenue, or the Avenue of Eternal Peace, in a display likely to unnerve its neighbours and countries farther afield, analysts say. 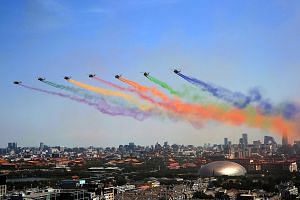 In a speech which mentioned the word "peace" 18 times, Mr Xi said the eight-year Sino-Japanese conflict from 1937 to 1945, which killed millions of Chinese, was "like a mirror which helps us better appreciate the value of peace".

He pitched the reduction of People's Liberation Army (PLA) troops by 300,000 as such a gesture, saying that the Chinese military will carry out the "noble mission of upholding world peace".

But China had reduced its troops three times before: in 1987, 1997 and 2003. And each cut was meant to streamline the PLA and make it a more efficient force, especially as it became more technologically savvy and the cost of running it became higher, said Dr Michael Raska, a research fellow at the S. Rajaratnam School of International Studies. "It's not an olive branch," he told The Straits Times.

The cuts are likely to accompany other reforms like a shift towards naval strength and the seas, which China highlighted as "critical" in a defence White Paper in May.

Among the weapons unveiled for the first time yesterday are the DF-21D anti-ship ballistic missile, which is capable of disabling US aircraft carriers with a single strike, as well as the DF-26, a missile that is able to hit Guam, a major US base in the western Pacific. In a sign of the concern over them, they have already been dubbed "carrier killer" and "Guam killer".

Xinhua reported that this is the first time armament formations in a military parade here were arranged based on their actual combat roles. "This indicates a change of the PLA training strategy with more focus on actual combat," it quoted analyst Peng Guangqian as saying.

Despite the mixed messages of peace and muscle-flexing, military expert Wang Xiangsui says China does not want conflict.

"Yet China needs to show that it won't be beaten or bullied anymore, like it was by the Japanese during the war," he said. "It's saying, you can't threaten us with your military power anymore. We can stand up to you."

Just as important, yesterday's parade was also targeted at China's domestic audience and appeared to reiterate Mr Xi's control over the PLA. "Besides signalling to the Chinese public that the country has arrived as a superpower, the parade also solidifies his leadership." said Dr Raska.

"It sends a message that the Communist Party is here to stay and that its rule can't be challenged."

A version of this article appeared in the print edition of The Straits Times on September 04, 2015, with the headline 'Message of 'peace' amid display of power'. Subscribe
Topics:
More
Whatsapp Linkedin FB Messenger Telegram Reddit WeChat Pinterest Print Purchase Article Copy permalink