In its editorial, the paper says that it would be more desirable to apply the same rules to all companies without exception, if labour and management can agree on longer workweeks within parameters set forth by the government.

SEOUL (THE KOREA HERALD/ASIA NEWS NETWORK) - The government announced earlier this week that it would exempt local producers of face masks from the maximum 52-hour workweek rule to cope with surging demand amid the spread of the new coronavirus.

It is increasingly difficult to buy masks with good filtering features here as people scramble to protect themselves from the virus, which originated from the central Chinese city of Wuhan in December.

Chinese visitors have been blamed for exacerbating the shortage of masks by going on a buying binge.

Tougher penalties to deter people from hoarding protective masks and hand sanitizer came into effect Wednesday and will be in force through April. Those who stock up on such items for the purpose of manipulating prices can face up to two years in prison or fines as high as 50 million won (S$58,443).

A 120-member squad, including officials from the police agency and the state antitrust watchdog, has been launched to crack down on hoarding.

Finance Minister Hong Nam-ki, who doubles as deputy prime minister for economic affairs, blamed market manipulation for the face mask shortage, saying it could not have occurred otherwise.

He may be partly right.

But the mask shortage should serve to highlight the need to redress flaws in the shortened workweek system.

It is outrageous that local mask makers could not increase production to meet the urgent demand without obtaining approval from labour inspectors to extend the weekly working hours for their employees.

The country's labor law was revised in February 2018, reducing the maximum weekly working hours to 52 from 68.

The reduced workweek came into force for companies with 300 or more employees in July last year.

All companies in the nation will have to comply with the revised rules beginning July 1, 2021.

In a stopgap measure to help soften the landing of the shortened workweek for SMEs, the government will not punish those firms for a year if they violate the new rules.

Companies will also be allowed to impose a temporary extension of work hours if they encounter a sudden increase in workload, if their facilities break down, or (in some industries) if they need to speed up research and development projects.

So far, employers have been allowed to require their workers to work longer than the legal limit in response to natural disasters and major accidents.

The government decided to exempt mask manufacturers from the shortened workweek rules in view of the higher workload during the coronavirus outbreak.

But there is no guarantee that companies will be granted permission to extend working hours if their workload increases as a result of successful marketing activities.

The government has exempted research and development work in the materials and equipment industries from the shortened workweek rules, but remains opposed to similar exemptions for other sectors.

It is inefficient and unreasonable for the government to deliberate and decide such matters case by case. 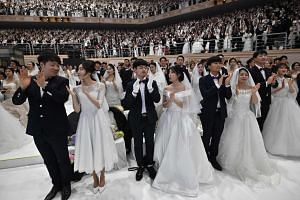 In sickness and in health: Mass wedding in South Korea defies coronavirus fears

It would be more desirable to apply the same rules to all companies without exception, if labour and management can agree on longer workweeks within parameters set forth by the government.

What is worrying is the objections from the country's two major umbrella labour groups to allowing mask producers and other workplaces to extend working hours to help contain the spread of the virus.

They have vowed to join hands to force its withdrawal, and have suggested that they might file legal action to stop it.

In effect, they are saying that vested labour interests are more important than protecting people's health and shoring up the national economy.

A fundamental way to cushion the negative effects of the shortened workweek system is to amend the law to expand an existing provision permitting flexible application of the rules, adjusting the maximum working hours to 52 on average within a certain period by allowing employees to work longer during busy times and later go on deferred leave.

The local business community has called for such flexibility to be built into the system on a yearly basis instead of the current three months.

Parliamentary deliberation on a bill aimed at expanding flexibility for employers has stalled for nearly a year due to the divergent positions of rival parties.

The opposition of labour organisations to the extension of working hours by mask producers should give fresh momentum to the Bill's enactment based on wider public support.

The Korea Herald is a member of The Straits Times media partner Asia News Network, an alliance of 24 news media organisations.