The report on the redelineation of electoral boundaries for Malaysia's next general election, which should be around the corner, was passed by Parliament yesterday, shortly after it was tabled by Prime Minister Najib Razak amid vociferous charges of gerrymandering by the opposition.

An attempt by the opposition to delay the debate failed, and it finally took place with seven lawmakers on either side of the political divide being given 10 minutes each to speak before it was put to the vote.

Voting was, as expected, mostly along party lines. The motion was passed with 129 MPs in favour and 80 against. A simple majority of 112 was needed for it to pass.

The opposition as well as critics of the changes had accused the Election Commission (EC), the government body under the Prime Minister's Department tasked with redrawing electoral boundaries, of creating maps that favour the ruling Barisan Nasional (BN) coalition.

Opposition MPs attempted to stop the presentation of the report in Parliament yesterday by arguing that there were ongoing court cases challenging the EC decisions.

But this was thrown out by the Speaker on the basis that Parliament's power was separate from that of the courts.

Veteran opposition lawmaker Lim Kit Siang also found himself suspended for six months after repeatedly questioning the Speaker's authority to enforce a week-long embargo on the EC report after it was presented to MPs last Thursday.

Mr Lim later told reporters that the Constitution had been violated, as the embargo was lifted only shortly before it was debated and voted on by lawmakers in the House. He insisted that MPs should have been given ample time to gather feedback on the changes from voters.

Datuk Seri Najib, amid opposition jeers, however, dismissed all charges of bias, telling the House: "The government has not interfered or influenced the EC... Moreover, the government always respects decisions made by the EC, for the good of all, for the sake of people and country." 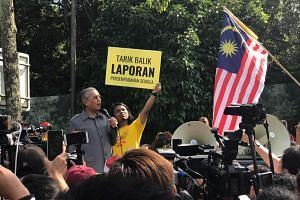 Mr Najib also told Parliament that it was "tough" to have evenly distributed seats with almost equal number of voters due to "rural areas that have different topography and demographics".

Opposition MP Ong Kian Ming said the electoral changes have vastly increased the percentage of Malay voters in some seats such as in Sungai Buloh, in Selangor, where the proportion of Malay voters has increased from 47 per cent to 64 per cent.

Malaysia has 14.6 million registered voters, and analysts say that Barisan Nasional needs to win only 33 per cent of these votes to retain power.

"To form a simple majority in government, you need to win 112 seats out of 222," said Mr Danesh Chacko, an analyst with electoral reform group Tindak Malaysia.

"Since there is significant dis-parity among the seat populations, the first 112 smallest seats amount to 33 per cent of the voters," he added.

The EC will now present the redelineation motion to the Yang di-Pertuan Agong (king) to obtain his royal consent.

Malaysia's Parliament is likely to be dissolved soon and polls are expected shortly thereafter, with some anticipating an election as early as end-April.