$2.1b loss for 2018 pinned on global issues, half of impairments due to Malaysia Airlines

The company pinned the loss on global market challenges, with half of the impairments due to Malaysia Airlines, the national carrier it owns.

In its annual review presentation, Khazanah's new managing director Shahril Ridza Ridzuan said the fund had to contend with short-term losses in order to actualise long-term gains it projects to achieve within five years.

"2018 was a very difficult year for markets, globally not just Malaysia," Datuk Shahril told reporters during the briefing.

Khazanah's net worth adjusted portfolio value dipped to RM91 billion as of end-2018, a 21 per cent drop from RM116 billion at end-2017. Its realisable asset value also declined to RM136 billion from RM157 billion during the same period.

"Key thing to focus on is restructuring our portfolio to look at long-term returns... based on a five-year rolling basis. You'll have fluctuations, years like 2018 where market severely underperformed... and years like 2017, where markets grew really well," he added.

Khazanah declared a RM1.5 billion dividend to the government, up from the 2017 dividend of RM1 billion announced before last May's general election. Its profit before tax for 2017 was RM2.89 billion.

The fund practises a conservative provisional accounting of its profit and loss statement, which explains its pre-tax loss due to market depreciation of some assets it holds.

Mr Shahril said the fund has profitable assets too, but those are not realised "until we dispose of them".

Responding to the news of Khazanah's pre-tax loss, former prime minister Najib Razak said on Facebook: "In the 10 years I was PM and chairperson of the company, Khazanah had never suffered a loss. Its assets value had never depreciated and increased every year when I was PM." He added that Khazanah's net asset value increased from RM33.7 billion in 2008 to RM116 billion in 2017.

Khazanah's refreshed mandate includes a relook of its investments and diversifying its portfolio across geographies and sectors globally. Three-quarters of the fund's investments are with Malaysian firms.

"With portfolio rebalancing, (what) we're doing is to take out the imbalances. For instance, we have large concentration risks, driven by the fact that in Malaysia at least, a big chunk of our assets is tied up in just a few companies," Mr Shahril said.

It also divided investments into commercial and strategic funds, as part of its restructuring of portfolios. That places companies it holds stake in, such as CIMB Group, Alibaba, Axiata and IHH Healthcare, under the commercial fund banner; while others like Telekom Malaysia (TM), Tenaga Nasional, Malaysia Airlines, PLUS Expressways and Malaysia Airports now fall under the strategic fund platform. 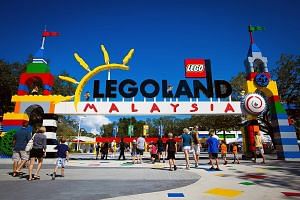 Khazanah may sell Legoland 'if the price is right'

Khazanah's underperforming companies last year were Malaysia Airlines and TM. The high impairment stemming from the airline was due to its inability to meet its objectives, with Khazanah adjusting the carrier's book value. The airline is conducting a review of its current strategy. Khazanah recorded an impairment of RM7.3 billion for 2018, RM5 billion more than 2017's figure.

TM suffered losses after the government announcement last year of a move to cut Internet costs for consumers. Communications and Multimedia Minister Gobind Singh Deo had instructed telcos to lower broadband prices, as part of the ruling pact's promise to slash prices and increase broadband speed.

"You'll see fluctuations due to regulatory changes… Most important for regulators is to make sure you have a regime where, while safeguarding consumer public interests, you have to also make sure there's enough incentive (for investors) to invest in the industry and get a profitable return," said Mr Shahril.

Khazanah is placed 25th worldwide in terms of asset size on the sovereign wealth fund rankings published by the Sovereign Wealth Fund Institute.