PETALING JAYA • Former chief of the Malaysian Anti-Corruption Commission (MACC) Mohd Shukri Abdull said he was not fired or pressured to step down from his job, as he addressed speculation on why he quit at the midway point of a two-year contract.

Datuk Seri Shukri also asked the public to give their support to the new chief commissioner of the anti-graft agency, Ms Latheefa Koya, who is facing headwinds on her unexpected appointment.

Mr Shukri told a news conference yesterday: "I appeal to the public, let me leave the MACC peacefully. All accusations that I was fired are baseless.

"I never took any bribes or abused a single cent. Never in my life have I covered up for anyone or closed any files."

His explanation is closely watched amid speculation that he was removed from office by Prime Minister Mahathir Mohamad's administration, as his two-year contract was due to expire only at the end of next year.

He said his decision to quit was planned from the very first day he returned to the MACC.

NO BRIBES OR COVER-UPS

I appeal to the public, let me leave the MACC peacefully. All accusations that I was fired are baseless. I never took any bribes or abused a single cent. Never in my life have I covered up for anyone or closed any files.

Mr Shukri, 59, said he had informed Tun Dr Mahathir when he was appointed in May last year of his intention to serve for only a year. Mr Shukri was forced into retirement from the MACC in 2016, as he was investigating the 1Malaysia Development Berhad (1MDB) scandal.

He said he came out of retirement only to solve two issues.

First, he wanted to complete investigations into 1MDB and its then subsidiary SRC International. The probe implicated former premier and finance minister Najib Razak.

Second, he said, he wanted to solve internal issues within the MACC due to differences among the officers.

"I set a one-year condition because I was convinced that I could solve these two issues in six months to a year," he added. 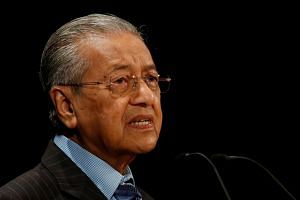 Latheefa must climb the proverbial mountain to bring change to system: Star columnist

He voiced confidence in his successor Ms Latheefa and asked the public to support her, adding: "Stop membawang (gossiping) and give Latheefa Koya a chance."

"Whether she is independent or not, we will see," he said. "But give her a chance. I trust she will do the best for the MACC and for our country."

The choice of Ms Latheefa has raised the question of whether it was a political appointment, which Pakatan Harapan (PH) had promised to step away from.

An activist lawyer, Ms Latheefa was a prominent member of Parti Keadilan Rakyat (PKR), a member of the ruling PH alliance. The 46-year-old quit PKR only after being appointed MACC chief commissioner.

Her appointment raised a ruckus in PH as she belonged to a PKR faction aligned to the party's deputy president Azmin Ali, who is at loggerheads with PKR president Anwar Ibrahim. Datuk Seri Anwar has said the government must clarify why she was appointed.

Dr Mahathir, asked yesterday to clarify Ms Latheefa's appointment, said: "What clarification? I have appointed many people and many officers and she is one of the officers. The appointment is final and the decision has already been made."