Malaysia will tomorrow see its largest street rally since the new government took power in May.

A protest-turned-thanksgiving rally backed by the country's biggest Malay-Muslim political parties is expected to draw tens of thousands to Kuala Lumpur to celebrate the administration's decision to not ratify a United Nations convention eliminating racial discrimination.

Despite Malaysia getting a new government with reformist credentials, racial issues continue to loom large, with the Malay community voicing fears that ratifying the charter - called the International Convention on the Elimination of All Forms of Racial Discrimination (ICERD) - would erode Malay rights granted under a decades-old affirmative action policy.

The Pakatan Harapan (PH) government, in its election manifesto, had promised human rights reform and ratification of relevant international conventions. However, widespread protests led to the administration making a U-turn last month, without any explanation.

"The strong reaction to ICERD is because of the government's failure to properly inform the public, especially the rural Malays (on the issue)," said Mr Asrul Hadi Abdullah Sani, an analyst at public policy consultancy BowerGroupAsia.

Instead, the government's fumbling over its handling of the backlash made room for opposition parties to score brownie points with the Malay electorate.

Umno and Parti Islam SeMalaysia (PAS) said they expected 500,000 of their members to turn up at the rally in Kuala Lumpur tomorrow. 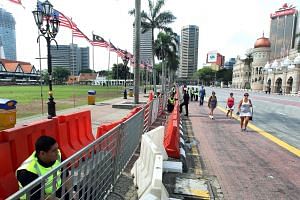 The political fireball that Pakatan did not see coming

Race and religion issues remain prickly in Malaysia, with Umno and PAS winning a bigger share of the Malay vote in the May general election. PH garnered only one-third of the Malay votes then, according to a study by independent pollster Merdeka Centre.

Analysts say that although the Mahathir administration is not ratifying the ICERD, the rally is proceeding because it serves as a platform for opposition parties to burnish their reputation as Malay-rights defenders. "It's to show themselves (Umno and PAS) as still relevant and taking credit that the government backed down," said Mr James Chin, director of the Asia Institute at University of Tasmania.

Umno, especially, has been plagued by bad press following multiple corruption probes into its leaders. "This is Zahid's big comeback," Mr Chin added, referring to Umno president Ahmad Zahid Hamidi, who was slapped with 45 charges in October.

At the same time tomorrow, Prime Minister Mahathir Mohamad will be attending another mass gathering some 10km away.

The human rights day celebration, organised by the Human Rights Commission of Malaysia, is expected to draw 3,000 people.

During the UN General Assembly in September, Tun Dr Mahathir said in his speech that Malaysia is committed to ratifying "core UN instruments related to the protection of human rights".

But a parliamentary debate on his UN speech saw Umno lawmakers raising concerns that a ratification of ICERD could jeopardise Malay privileges guaranteed by the federal Constitution.