The Malaysian government is laying the groundwork to shut down 1Malaysia Development Berhad (1MDB), the state investment firm mired in a scandal that has become the most serious blight on Prime Minister Najib Razak's administration at home and abroad.

Under a plan spearheaded by a high-level government unit called the Budiman committee, the assets of the state development fund will be transferred in the coming months to two companies owned by the Finance Ministry.

These valuable assets are two massive plots of land in Kuala Lumpur and one on Penang island.

1MDB, which at one point had debts totalling US$12 billion (S$17.2 billion), last November sold off its other main asset - power plants grouped under Edra Energy - to a Chinese company for RM17 billion (S$5.4 billion). 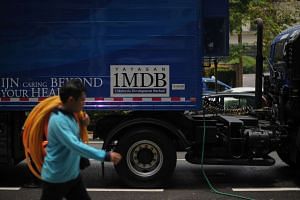 Malaysia government to wind up 1MDB: A look at the state fund's debts, assets and liabilities

The three plots of land will be transferred to Piramid Pertama and Aroma Teraju, according to government officials and lawyers involved in 1MDB's debt workout.

"The resolution of 1MDB's debt obligations will be carried out separately by the government," said a senior government official familiar with the exercise.

Datuk Seri Najib, who set up 1MDB seven years ago to spur development at home and to pursue strategic investments abroad, has repeatedly rejected claims that 1MDB had morphed into a private political slush fund for him and his ruling Umno party.

To head off the deepening crisis at 1MDB last year, the government decided to dissolve the company and embark on a divestment of its assets to settle its debts.

The Budiman committee, headed by Second Finance Minister Johari Abdul Ghani, was set up last April to handle the restructuring.

In a recent interview with The Straits Times, Datuk Seri Johari noted that proceeds from the sale of 1MDB's power generation business had helped settle debts owed to Malaysian banks.

"Our next move is to kick-start the property development of Bandar Malaysia and TRX," he said, referring to 1MDB's two major real estate projects on the fringes of Kuala Lumpur.

Bandar Malaysia, 40 per cent owned by 1MDB and 60 per cent by a Malaysian-Chinese consortium, is an upcoming township being built on 197ha of land on the edge of Kuala Lumpur. It will house the Singapore-KL high-speed rail terminus.

Nearby is the 28ha Tun Razak Exchange, or TRX, which is slated to be the capital's financial hub.

Another plot of real estate to be transferred out of 1MDB is a 94.7ha parcel of land in Penang's Air Itam district.

A major challenge will be securing support for the plan from 1MDB's bond holders and creditors.

1MDB's current debt load is estimated at US$4.78 billion.

Separately, the Malaysian entity is locked in a dispute with two Abu Dhabi state-owned concerns, which are demanding US$6.48 billion for financial guarantees on a bond issue and direct loans extended to 1MDB.

1MDB's debt profile is also complex. "Some (of the debt comes with) outright guarantees, some are with letters of comfort and letters of support," said a lawyer close to the situation.

To win approval for the plan, the government must guarantee 1MDB's creditors and holders of billions of dollars in bonds that it will honour all obligations of the state-owned entity upon its liquidation as a company, officials and bankers said.