KUALA LUMPUR • Malaysia's Health Minister Dzulkefly Ahmad has pledged to decriminalise drug addiction and drug possession for personal use, in a move he calls a "game-changer policy".

"Decriminalisation is the removal of criminal penalties for possessing or using a small quantity of drugs for personal use," he said in a statement released on Thursday.

However, he stressed that drug trafficking will remain a crime.

"Malaysia is about to embark on a significant game-changer policy of decriminalisation of drug addicts and addiction," he said.

The ministry said the move would be a critical next step towards "achieving a rational drug policy that puts science and public health before punishment and incarceration", calling addiction "a complex chronic relapsing medical condition".

"An addict shall be treated as a patient (not a criminal) whose disease we would like to cure," the ministry's statement added.

Datuk Seri Dzulkefly pointed to evidence that showed decriminalisation of drug addiction had not led to an increase in drug use.

Home Minister Muhyiddin Yassin had said on Monday that of the 70,000 inmates being held in Malaysian prisons, the majority were drug addicts.

Online news site The Malaysian Insight quoted Dr Dzulkefly as saying: "With the process of decriminalisation, prisoners who are categorised as drug addicts will be given treatment and rehabilitation."

The measure is considered unprecedented, as punishment for non-drug trafficking offences in Malaysia can range from imprisonment to whipping and fines. Capital punishment is still enforced for drug trafficking. 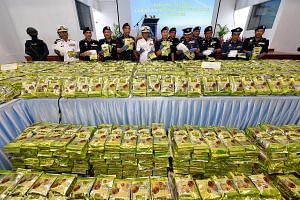 Dr Dzulkefly also said that among the factors for drug use and addiction were genetic predisposition and the surrounding environment such as poverty, family breakdown, school and peer pressure.

As such, he said, it is hard to reverse the biological changes experienced by a person who has continuously used drugs.

"Certainly putting them (addicts) in prison is not going to change that. It is not just a matter of someone having weak willpower.

"An addict shall be treated as a patient, whose addiction is a disease we would like to cure," he added.

Dr Dzulkefly noted that more than 30 countries have adopted decriminalisation, with research showing it has not led to a rise in drug use and drug-related crimes.

Malaysia Crime Prevention Foundation senior vice-chairman Lee Lam Thye, in supporting the government's plan, said that in 2016, the number of addicts had increased by 14 per cent from 2015, and that 58 per cent of convicts in jail were there for drug-related offences.

"It was also reported that the government spent over half a billion ringgit (S$164 million) to jail minor drug offenders in 2017 and over RM200 million more to arrest and house addicts in state-run rehabilitation centres in the same year.

"The staggering cost and high number of drug addicts show that we have failed in our war, which has spanned decades, against abuse of drugs," Tan Sri Lee said.