Militants detained on their way to join ISIS, says DPM Zahid who is visiting China

He added that the militants - members of the East Turkestan Islamic Movement (ETIM) - were detained in Malaysia while they were on their way to Turkey to join terror group Islamic State in Iraq and Syria (ISIS).

"Chinese intelligence shared their information, including biometrics, with us. The militants were detained before they could leave Malaysia," he told the Malaysian media, in news reported by the New Straits Times (NST) on its website yesterday. "They were arrested under the Special Measures Against Terrorism in Foreign Countries Act 2015."

Datuk Seri Dr Zahid is in China for a five-day visit that started on Tuesday at the invitation of China's Public Security Minister Guo Shengkun. 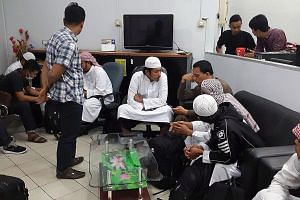 Mr Zahid said the Chinese authorities thanked Malaysia for the arrest of the ETIM members.

Beijing also praised Malaysia for its help in breaking up syndicates whose members included both Malaysians and Chinese citizens.

They were reported to have fleeced at least RM12.9 billion (S$4.1 billion) from Chinese citizens in various scams, NST reported.

Mr Zahid said 744 syndicate members, who were based in Malaysia, had been nabbed over the past few years.

In a separate development, an American and an Australian have appeared in a Taleban hostage video five months after they were kidnapped in Kabul, AFP reported yesterday. Gunmen wearing police uniforms abducted the two professors at the American University of Afghanistan on Aug 7.

Meanwhile, Philippine militants have released a video showing an elderly German sailor, abducted late last year, is alive, according to a security group as reported by AFP. Abu Sayyaf, a kidnap-for-ransom gang in the southern Philippines, has released the video of Mr Jurgen Kantner, SITE Intelligence Group reported.