The National Policy on Industry 4.0, named Industry4WRD, will support efforts to rely more on technology, and less on capital and labour, to increase productivity.

However, the Malaysian government, which is grappling with a RM1 trillion (S$332 billion) national debt and is expected to unveil a "Budget of sacrifice" tomorrow, said it will not be offering any financial subsidies or incentives to companies.

According to the industrial policy blueprint, government support will instead come in the form of collaboration via public-private partnerships and investment-friendly taxes.

The policy aims to address a decades-old problem - how a country like Malaysia can break out of its middle-income trap and emerge as a First World nation.

Plans to propel the economy forward by attracting skilled talent via job creation, upping productivity and raising innovation are not new. During his first tenure as prime minister from 1981 to 2003, Tun Dr Mahathir had put forward Vision 2020, a roadmap for Malaysia to achieve developed nation status by 2020. 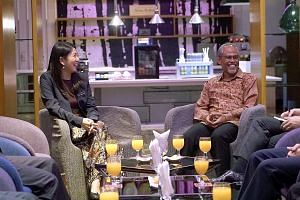 "Given the setback that this country had gone through in the last 11/2 decades, it is imperative for us to work even harder and strive with even greater tenacity, greater creativity and effectiveness to ensure very rapid and sustainable growth," said Dr Mahathir.

Malaysia's skilled labour as a proportion of the workforce has declined since 2010, dropping by one percentage point to 18 per cent last year.

For skilled workers within the manufacturing sector, the government intends to nearly double the number from 18 per cent to 35 per cent by 2025.

This new industrial policy hopes to raise the manufacturing industry's contribution to the economy by 54 per cent to reach RM392 billion by 2025. That also means productivity needs to increase by 30 per cent.

"It is the manufacturing sector that allows Malaysia to consistently demonstrate dynamism and resilience to grow while attracting foreign direct investments," said Dr Mahathir.

Malaysia's labour productivity has increased by less than 4 per cent in the past few years, and its global productivity ranking has stagnated since 2009.

"The policy envisions Malaysia as a strategic partner for smart manufacturing, primary destination for high-tech industries and total solution provider for manufacturing sector and services in the region," Dr Mahathir said in his speech.