Tun Dr Mahathir had said in an interview with The Weekend Australian that the chances of ousting Datuk Seri Najib, who is under fire over heavily indebted state investment fund 1MDB, were slim if there was no external pressure.

Deputy Prime Minister Ahmad Zahid Hamidi said yesterday that Dr Mahathir, when in power from 1981-2003, had frequently reminded government officers and party leaders not to cooperate with foreign powers to tarnish Malaysia's image or damage the country. 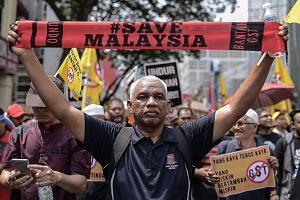 Najib holding up under Mahathir's attacks

"He used to scold us if we cooperated with foreigners, while some of us have also even been accused as being foreign agents," Datuk Ahmad Zahid told reporters after closing the 1Malaysia Welfare Tour in Perak, according to the New Straits Times.

"Umno Veterans do not want the government to compromise in matters affecting the stability of the country, and we cannot allow any citizen to sabotage their own country," the group's secretary Mustapha Yaakub said in a statement.

Dr Mahathir quit the ruling Umno in February and has stood with the opposition in calling for Datuk Seri Najib to resign over the scandal over 1MDB, which had accumulated RM50 billion (S$17.2 billion) in debt up to January this year, and the premier's acceptance of a US$681 million (S$919 million) payment which he maintained was a personal donation from the Saudi royal family.

He used to scold us if we cooperated with foreigners, while some of us have also even been accused as being foreign agents.

Malaysia's parliamentary inquiry into 1MDB said last week that its board of directors had failed to carry out its responsibilities and its former chief, Mr Shahrol Halmi, must be further investigated.

But it stopped short of implicating Mr Najib, who heads the 1MDB advisory board. 1MDB's transactions are under probe in Switzerland, Singapore, the United States and Hong Kong.

"I believe that many, even amongst the Opposition, will not agree to his latest antics of inviting foreign interference into our domestic affairs," Datuk Seri Ti was quoted as saying. "This is political madness and an act of desperation by a man who has never failed in ousting any leaders he wanted to."