Ms Lam said the firms told the government that "the time is not right" as the violence and unrest in the semi-autonomous Chinese territory showed no signs of ending. She didn't give details on the firms or when they were approached.

The city's reputation was likely tarnished not just by the protests but by what many viewed as the government's slow response to the crisis.

Days after more than a million people took to the streets in early June, kicking off the protests, Ms Lam suspended an extradition Bill that sparked the unrest but refused to formally withdraw it.

She caved in this month after the demonstrations escalated, but the promise to axe the Bill was deemed too little, too late as protesters widened their demands to include democratic reforms.

"It would perhaps be not the most cost-effective way to use government resources to launch any campaign to rebuild Hong Kong's reputation, but sooner or later, we will have to do it because I have every confidence in Hong Kong's fundamentals," Ms Lam told a news conference on Tuesday.

"The time will come for us to launch a major campaign to restore some of the damage done to Hong Kong's reputation," she said.

Hong Kong's economy, already reeling from the US-China trade war, is facing its first recession in years, with tourist arrivals plunging and businesses being hit by the unrest. 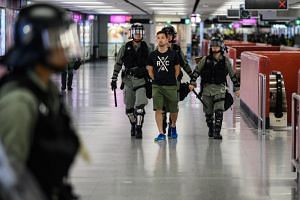 Violence flared again over the weekend after an unapproved march downtown descended into familiar chaos.

Ms Lam said the city's downgrade this week by credit ratings agency Moody's was "disappointing", but acknowledged that the continued instability has tarnished international perception of Hong Kong's financial stability.

Moody's was the second agency to make the move after Fitch Rating.

Ms Lam said that she will begin open dialogues next week with various community groups, including protesters, and that participants can freely express their views.

Many protesters have said the dialogues are meaningless if the government refuses to accept their four other demands - direct elections for the city's leaders, an independent inquiry into alleged police brutality, unconditional release of protesters who have been detained and not labelling the protests as riots.

Ms Lam said not all Hong Kong citizens support the protesters' demands and reiterated that the government cannot condone violence.

She said the dialogues are not one-off "gimmicks" but an important first step to resolve grievances over problems such as shortage of affordable housing and lack of jobs that contributed to the unrest.

Also, a subway train derailed during Tuesday morning rush hour, sparking rumours that it may have been caused by protesters, some of whom have vandalised subway stations in recent weeks.

Transport Secretary Frank Chan urged the public not to speculate as investigations are ongoing. The fire department said eight people were injured, with five of them hospitalised.