Malaysia is looking into allegations that China had offered to help deter probes into 1Malaysia Development Berhad in exchange for infrastructure projects, after the Wall Street Journal (WSJ) reported that senior Chinese leaders offered to help bail out the troubled state fund in 2016.

The government is unaware of the discussions detailed in the WSJ report, which cited minutes from meetings the newspaper reviewed, and is examining the matter, said Finance Minister Lim Guan Eng yesterday. The cost of China-backed projects was certainly enlarged and Malaysia will check whether that was due to 1MDB links, Mr Lim said.

"But I have to refer back to see if there are details or things explicitly said," Mr Lim added, saying that the government is looking through records. "If this is said, this is something we will pursue."

Chinese officials told visiting Malaysians that China would use its influence to try and get the US and other countries to drop probes into allegations that allies of then Prime Minister Najib Razak and others had plundered the fund, according to the WSJ. In return, Malaysia had offered stakes in railway and pipeline projects as part of China's Belt and Road Initiative.

The minutes state that the projects were to be presented as market-driven initiatives, even though their real purposes were to shore up Najib's government, settle 1MDB debts and deepen Chinese influence in Malaysia.

The Chinese government information office did not respond to requests for comment, the WSJ said, adding that China's Foreign Ministry had earlier denied that money in the programme was used to help bail out the 1MDB fund.

"Both China and Malaysia are cooperating on certain projects," China's Foreign Ministry spokesman Lu Kang told reporters in Beijing yesterday, saying he was not aware of the WSJ report. "We also maintain close communication and sound cooperation with the new Malaysian administration." 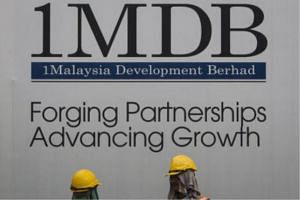 Malaysia seeks S$10b in reparations from Goldman Sachs over 1MDB

In a Facebook post yesterday, Najib denied the allegations, saying that Beijing had never offered to bail out the state investment firm.

Malaysia's government will ensure that all its dealings are based on transparency and accountability, Minister of Economic Affairs Azmin Ali told reporters yesterday, saying he was unaware of what was reported by the WSJ. The Malaysian Cabinet was never informed that the China deals were linked to bailing out 1MDB, former youth and sports minister Khairy Jamaluddin said on Twitter. Any such agreements would have been made without Cabinet approval, he said.

1MDB is at the centre of a global scandal involving claims of embezzlement and money laundering, with jurisdictions from the US, Malaysia and Singapore probing cases related to the fund. Najib has been charged with dozens of counts of corruption, criminal breach of trust and money laundering involving 1MDB-related monies.

He has denied wrongdoing and pleaded not guilty to all charges.

Malaysia's current government, which toppled Najib from power in a shock election victory last May, has halted billion-dollar projects backed by China. The list includes the Sabah gas pipeline project awarded to China Petroleum Pipeline Bureau and overseen by Suria Strategic Energy Resources, which has had its office raided by the anti-graft agency, and the RM81 billion (S$27 billion) East Coast Rail Link.

China also offered to bug the homes and offices of WSJ reporters in Hong Kong who were investigating 1MDB, to learn who was leaking information to them, the report said. It could not be determined whether China provided any such information, the WSJ added.