KUALA LUMPUR • The attack on Mr Kim Jong Nam is likely to have involved the use of two chemicals, one after the other, by the two female assailants, the New Straits Times (NST) reported yesterday.

The substances are non-lethal on their own but once combined became the deadly VX nerve agent, the paper quoted a source close to the ongoing Malaysian government probe as saying.

Investigators have possibly found one of the chemicals on the victim, the estranged half-brother of North Korean leader Kim Jong Un, who was attacked as he was about to take a flight out of the second terminal of Kuala Lumpur International Airport (KLIA2).

At least two individuals at KLIA2 who attended to the late Mr Kim, as he desperately sought help, noticed a foul smell coming from him.

The NST report said the binary chemical agent combines two agents, one of which is elemental sulphur, or Agent NE. The other is O-(2-diisopropylaminoethyl) methylphosphonite, or Agent QL. 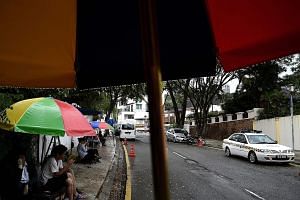 "Only 10ml of the liquid reagent (non-toxic) was needed, and it could be carried undetected anywhere, even through an airport scanner," the NST quoted its source as saying.

"Had it not been for CCTV footage, his death would have probably been attributed to a heart attack."

Two women - Indonesian Siti Aisyah, 25, and Vietnamese Doan Thi Huong, 28 - were charged with killing Mr Kim, who died on the way to hospital after the duo allegedly smeared his face with a liquid before he was to board a flight to Macau.

Police had said the two women washed their hands after the attack, before making their escape.

Malaysia earlier said an autopsy revealed that Mr Kim died after exposure to the lethal VX nerve agent, listed as a weapon of mass destruction by the United Nations.

After the attack, Mr Kim was seen talking to several security and airport officials, and walked to the airport clinic as he sought treatment, with NST reporting that two of those who attended to him noticed the foul smell.

"That would be explained by the sulphate, as it has a rotten egg odour. It can also induce vomiting," the unnamed source was quoted as saying.