A key figure behind the Jan 14 terror attack in Jakarta got nine years in jail yesterday for funding, recruiting and supplying weapons for the operation.

A district court said there was sufficient evidence to prove that Abu Gar had "assisted in the act of terror". The 43-year-old militant does not intend to appeal against his sentence.

The brazen hit on the capital city, which led to the deaths of eight people, including the four perpetrators, was the first terror attack on Indonesian soil since the 2009 twin bombings at the JW Marriott and Ritz-Carlton hotels. Seven people died and 50 were injured, including a number of foreigners, in those attacks.

The January incident was mounted by the "Jakarta Four" of Sunakim alias Afif, Muhammad Ali, Dian Juni Kurniadi and Ahmad Muhazin, with the Islamic State in Iraq and Syria (ISIS) later claiming responsibility for it. 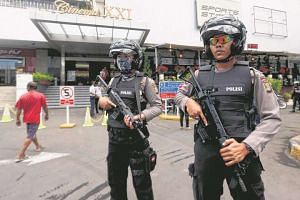 More on the Jakarta attacks and Indonesia's war on terror

Abu Gar, along with the Jakarta Four, has been a follower of radical ideologue Aman Abdurrahman, investigations show.

In November last year, Aman - who is serving time in Indonesia's maximum-security Nusakambangan prison - gave Abu Gar a message, purportedly from ISIS, to carry out a strike in Indonesia similar to the Paris attacks.

Abu Gar declined to take part directly in the attack, and instead offered to coordinate and recruit for the operation.

Rois is currently on death row for his part in the 2004 bombing of the Australian embassy in Jakarta.

Prosecutors had said Abu Gar recruited Ali to carry out a suicide bombing, and acquired the pistols found on Ali and Sunakim after they died at the scene.

The police said the money was transferred to Abu Gar from Syria last year by Abu Jandal, an Indonesian militant fighting alongside ISIS in the Middle East.

The prosecution said Abu Gar, under the direction of Aman, then ordered the four men to attack a Starbucks cafe in the Menara Cakrawala building along Jalan M.H. Thamrin in downtown Jakarta.

Their main targets were French and Russian nationals.

A veteran militant who has taken part in other conflicts in Indonesia, Abu Gar, whose real name is Saiful Muhtorir, was originally from Cilacap in Central Java.

He had travelled to Ambon in Maluku province some time after 1999 to fight in a sectarian conflict against Christians. He was arrested in Malang in East Java by Detachment 88 (Densus 88), the elite counter-terrorism unit of the police, during a raid on Feb 19.

The court said yesterday that in sentencing Abu Gar, it also took into consideration the fact that he had confessed to smuggling firearms in March 2012 in Serang, Banten province, under the direction of Rois.

Abu Gar is among a group of at least 17 suspects to be prosecuted in connection with the January attack.

Last month, 23-year-old bombmaker Dodi Suridi was sentenced to 10 years in jail for helping to make the explosives used during the attack, while 47-year-old Ali Hamka was jailed for four years for trying to acquire firearms for the same strike.

Yesterday, Densus 88 nabbed a 23-year-old named Rio Priatna in Majalengka, West Java, who is suspected to be linked to the same terror network as Aman and Bahrun Naim, another Indonesian believed to have travelled to Syria to join ISIS.