President Joko Widodo will set out to sea on a navy warship during a rare visit to the waters off Indonesia's Natuna Islands today, The Straits Times has learnt.

He will also hold a meeting with a closed group of ministers and military officials on board the vessel, said two sources in the government who asked not to be named.

While they did not reveal the meeting agenda, it will undoubtedly centre on the issue of illegal fishing and the repeated claims by Beijing that Indonesia's exclusive economic zone, or EEZ, in the Natunas, is part of China's "traditional fishing grounds".

The visit will come just days after Vice-President Jusuf Kalla indicated in an interview with Reuters that Indonesia would be more assertive in upholding its sovereignty over waters around the Natunas.

A provincial official also told The Straits Times separately yesterday that Mr Joko plans to inspect the China-flagged Yueyandong Yu 19038 fishing boat held by the navy for poaching in those same waters.

Our position is clear that claims can be made only on the basis of international law and, for Indonesia, we don't have overlapping claims in any form in Indonesian waters with China. 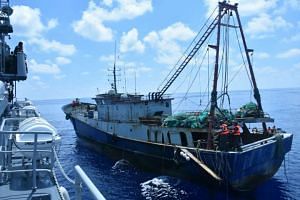 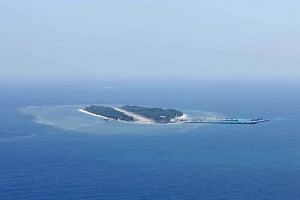 China 'to offer cruises to Spratlys by 2020' 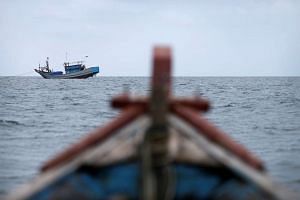 Riau Islands provincial government spokesman Hery Mokhrizal said the boat and its crew of seven have been detained at the Ranai Naval Base for investigations since they were caught last Friday.

Ranai is the capital of Natuna Regency, which is located in the Natuna archipelago of the South China Sea, some 550km north-east of Indonesia's Batam island and 530km from Singapore.

The presence of Yueyandong Yu and other Chinese fishing boats poaching in the Natunas is a ruse by Beijing to stake its claims in the South China Sea, said Rear-Admiral A. Taufiq R., Indonesia's Western Fleet commander, on Tuesday.

China claims almost all of the South China Sea while Vietnam, the Philippines, Malaysia and Brunei have overlapping claims. China's land reclamation works on disputed islands and reefs in the waterway as well as activities by its fishermen have escalated tensions in the region over the past year.

Indonesia is not a party to the disputes but grew concerned after Beijing in March said the waters around the Natunas, within Indonesia's EEZ, are part of its "traditional fishing grounds".

Beijing had said on Monday that while the two countries are not involved in any territorial disputes, there were some overlapping claims on "maritime rights and interests", reported Reuters.

"Our position is clear that claims can be made only on the basis of international law and, for Indonesia, we don't have overlapping claims in any form in Indonesian waters with China," said Ms Retno, responding to Beijing's remarks on Monday.

The Yueyandong Yu is among 57 foreign-flagged fishing boats held by Indonesia's maritime authorities for poaching since the start of this year, Maritime Affairs and Fisheries Minister Susi Pudjiastuti had said on Tuesday.

Three of the boats are from China, 49 from Vietnam, four from Malaysia and one from Thailand. The ministry has already blown up and sunk 176 fishing boats captured from poachers since October last year.

Ms Susi has vowed to continue to get tough with poachers, regardless of their nationality. Some 30 more of these illegal fishing boats, including one from China, will be blown up and sunk after Ramadan in July.

A version of this article appeared in the print edition of The Straits Times on June 23, 2016, with the headline 'Jokowi to board navy warship and head for Natunas'. Subscribe
Topics:
More
Whatsapp Linkedin FB Messenger Telegram Reddit WeChat Pinterest Print Purchase Article Copy permalink