President Joko Widodo yesterday ordered the Indonesian military and police to pursue and bring to justice the perpetrators of the massacre in Papua province, where 20 people were allegedly shot by separatist rebels on Sunday.

The killings in Nduga district, in the centre of the region on the western half of New Guinea island, are said to be the deadliest bout of violence in years to hit the area, which has long been the centre of a low-level independence insurgency.

"I assert that there's no place for these armed criminal groups either in Papua or any other parts nationwide, and we will never be afraid," said the President.

He told reporters: "This (incident) even makes our determination stronger to continue our big task to build Papua."

Nineteen employees of state-owned construction firm Istana Karya killed in the incident in Yigi district, Nduga Regency, were building two bridges - Kali Aorak and Kali Yigi - which are part of the road network.

A military officer was later killed during a gunfight between the military and the West Papua Liberation Army, which has claimed responsibility for the killings, according to Radio New Zealand.

The killings occurred after the arrests of 537 activists by the police in rallies last Saturday. The date is considered by many Papuans as their day of independence from the Dutch. NO PLACE FOR ARMED CRIMINAL GROUPS

I assert that there's no place for these armed criminal groups either in Papua or any other parts nationwide, and we will never be afraid.

Papua declared its independence on Dec 1, 1961, but Indonesia invaded the region in 1963 and later annexed it following a United Nations-backed referendum in 1969. Since then, the country has seen a longstanding separatist conflict in the area.

Papua remains the poorest region in South-east Asia's biggest economy despite its abundant natural resources, particularly gold and copper. Since the start of his administration in late 2014, Mr Jokowi has launched an ambitious infrastructure push and this includes enhancing the connectivity in Papua.

National Police chief Tito Karnavian said a joint team led by Papua's police and military commander is heading to the area of the shootings. He estimated that the rebels totalled only between 30 and 50 people with 20 guns.

"As we are sending a stronger team, we believe that we can control (the situation) soon," he said.

But he acknowledged that the location - a vast forest - poses challenges and might allow the rebels to escape. "We've coordinated to improve the security," he added. 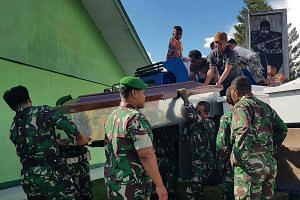 He also said the construction of infrastructure in the region must go on, in line with the President's instruction, and his team is ready to ensure the security there, including by opening a dialogue with residents, among other measures.

Amnesty International Indonesia said the authorities must carry out "a prompt, thorough, independent and impartial investigation" while ensuring that all those involved are brought to justice in fair trials without recourse to the death penalty.

"It is vital that the government response to the killings does not lead to further human rights violations. Security forces have a track record of violent clampdowns and this abhorrent act should be no justification for going down that path," executive director Usman Hamid said in a statement.