Jakarta governor Basuki Tjahaja Purnama was packed off to prison yesterday after the North Jakarta District Court found him guilty of blasphemy against Islam.

He was given an unexpectedly harsh two-year jail sentence by a five-judge court, which did not follow the prosecutors' recommendation of two years' probation on a lesser charge of insulting Muslims.

The governor's supporters reacted with disbelief, many breaking down over the latest setback for Basuki, who lost last month's gubernatorial race.

In court, Basuki did not say anything other than that he would appeal against the verdict. 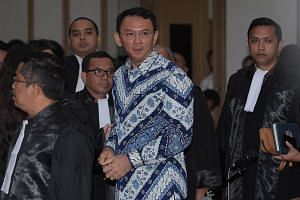 On Monday night, he said he would leave everything in God's hands.

The shock ruling prompted President Joko Widodo to call for calm in the capital, where hardline Muslim groups had staged anti-Basuki protests since late last year to demand that he be jailed.

Mr Joko urged all Indonesians to respect the court's decision as well as Basuki's appeal decision.

"What is important is that we trust in the legal mechanism to resolve problems that we face," he told reporters during a working visit to Papua.

"That is the way a democratic country handles differences in public. The government cannot intervene in the legal process," he added. Basuki was deputy governor when Mr Joko was Jakarta's governor.

The order for Basuki to begin his jail sentence immediately - despite his decision to appeal - added to the twists and turns of the highly politicised trial.

One of his lawyers, Mr I. Wayan Sudirta, told reporters that while he respected the court, he disagreed with its ruling.

Asked for the reason, he said: "Because the (political) pressure has been so enormous and has reached the court. We are disappointed with this ruling. That is why we are appealing."

The blasphemy case against Basuki has thrust Indonesia's national values of unity in diversity and racial and religious tolerance into the international media spotlight.

Basuki, better known by his Chinese nickname Ahok, is a Christian, making him a double minority in a Muslim-majority country.

"Two years is a long time, Ahok is right to appeal. This is unbelievable," bank clerk Gede, who goes by one name, said outside an auditorium at the Ministry of Agriculture in South Jakarta, where the hearing was heard.

After Basuki was taken to Cipinang prison in East Jakarta, several hundred of his supporters rallied outside the facility. His wife Veronica and deputy governor Djarot Saiful Hidayat were later also seen there.

The case against Basuki involved a speech he made to constituents last September, when he was heard referring to a verse in the Quran while telling them that they should not be misled by opponents urging Muslims to reject a non-Muslim leader.

A key consideration of the case was whether his comments were blasphemous against Islam, said the five-judge panel, which comprised four Muslims and a Hindu. A Catholic judge, who was initially on the panel, died in February and was replaced by a fourth Muslim judge.

The panel said yesterday that there was sufficient evidence to prove that Basuki had deliberately committed blasphemy and, hence, was guilty of the heavier charge.

"We are handing him a prison term of two years and ordering the defendant to be detained," head judge Dwiarso Budi Santiarto said in reading the outcome.

Meanwhile, Mr Djarot will be acting governor until October, when the reins of City Hall will be handed over to governor-elect Anies Baswedan and his deputy Sandiaga Uno.

A version of this article appeared in the print edition of The Straits Times on May 10, 2017, with the headline 'Jokowi calls for calm as Ahok goes straight to prison'. Subscribe
Topics:
More
Whatsapp Linkedin FB Messenger Telegram Reddit WeChat Pinterest Print Purchase Article Copy permalink