"Prime Minister (Shinzo) Abe assured us that if, in future, we have a need to seek Japanese support in solving our financial problems, he's ready and the Japanese government is ready to consider (it)," Tun Dr Mahathir told a news conference on the second day of his three-day visit to Japan, reported Reuters.

Malaysia last week announced an expanded budget for 2019 and forecast a wider fiscal deficit, as Dr Mahathir's administration grapples with shrinking revenue and a large debt left by its predecessor.

Such Samurai bonds can be issued with relatively low interest rates and thus can help the country tackle its fiscal problems, the official said, according to The Japan Times.

Mr Abe, speaking at the news conference with Dr Mahathir, said: "It was confirmed that we would aim for the issuance (of Samurai bonds) guaranteed by the JBIC." The bonds are expected to be issued before March next year, Bernama reported. 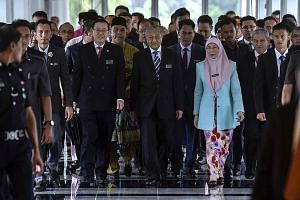 Dr Mahathir said last Friday that the Samurai bonds would be used to retire some of the costly loans taken by the previous government.

Mr Abe said a team of experts from Japan's railway firms would be dispatched to Malaysia at the end of this month as part of a study.

"I told Dr Mahathir that Japan will study with Malaysia the possibility of extending yen loans with primary focus on transportation, education and human resource development. I hope this study will lead to concrete cooperation in future," he was quoted as saying by The Star.