As fears linger that the world is on the brink of a second Cold War, Japan pulled closer into China and Russia's orbit yesterday at an economic forum in the Russian port city of Vladivostok, in the absence of leaders from its ally United States.

Prime Minister Shinzo Abe met Chinese President Xi Jinping for their first summit since last November, when they had vowed a "fresh start" in ties.

Mr Xi agreed with Mr Abe's assessment that the "horizon for bilateral cooperation is widening".

The Japanese premier's landmark visit to Beijing next month may result in the signing of agreements for 20 to 30 projects related to China's Belt and Road Initiative.

Japan has also been courting Russia in pursuit of joint economic activity on the Northern Territories/ Southern Kurils, four disputed islands north of Hokkaido that were occupied by the former Soviet Union in the closing days of World War II.

Both countries still do not have a peace treaty, 73 years after the war. But Russian President Vladimir Putin made a surprise proposal at the forum yesterday: He wants to reach a peace deal "without any preconditions" by the end of the year.

The leaders were attending the fourth annual Eastern Economic Forum, first held in 2015 as part of Mr Putin's push to build ties with Asia as Moscow's relations with the West soured.

The Soviet Union and China were the adversaries of the West during the Cold War. And the West now sees as threats to the world order the rising dominance of China, and Russia's interference with democratic processes.

Mr Xi agreed with Mr Putin on Tuesday that their countries will safeguard global peace and stability as bilateral ties have "entered a new period of higher-level and faster development". And yesterday, he said in his meeting with Mr Abe that China-Japan ties have "entered a normal course through the common effort by both sides". 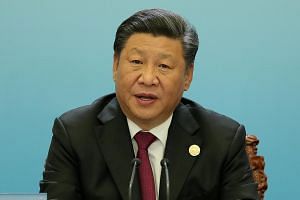 Mr Abe is expected to visit Beijing on or around Oct 23, the same day a bilateral friendship and peace treaty had entered into force 40 years ago. Mr Xi is expected to reciprocate the visit in June next year.

While ties between Asia's two largest economies have long been volatile, they took a turn for the worse in September 2012, when Tokyo nationalised the disputed Senkaku/Diaoyu islets.

Both countries are still effectively in an arms race - Japan identified China as its key security threat in its defence review this year - but they appear keen to stave off accidental military clashes and began a conflict hotline in June.

They have become vocal cheerleaders amid the assault on free trade, and are keen to work together on development projects in third-party countries, including a high-speed rail in Thailand. They also held their first bilateral economic dialogue in eight years this April, and in May, Premier Li Keqiang became the first Chinese premier in as many years to visit Japan.

"We will push bilateral ties to a new stage so as to construct a foundation for peace and prosperity in north-east Asia," Mr Abe said.

Mr Abe told the forum that Japan is on the same page as China and Russia on North Korea relinquishing its nuclear arms. And in the hopes of securing the return of Japanese abducted by Pyongyang decades ago, Mr Abe said: "I too must break the shell of mutual distrust, take a step forward, and ultimately meet with Chairman Kim Jong Un." He stressed, however, that nothing has yet been decided on such a summit.

As for Japan-Russia ties, Mr Putin told the forum he was "not joking" as he said: "An idea has just come to my mind. Let's conclude a peace treaty before the end of this year, without any preconditions."

Mr Abe, who was on the same stage, did not reply. But he had said earlier that the lack of a peace treaty was "an abnormal state of affairs".

Japan is concerned with Russia's militarisation of the disputed islands, and wants to at least move ahead on joint economic activity before it considers a peace deal.