As the Islamic State in Iraq and Syria (ISIS) loses its grip on territories in the Middle East, the militant group is expected to look towards South-east Asia to perpetuate its claims to a caliphate.

Possible targets include Indonesia, Malaysia, the Philippines and Singapore, where the Jemaah Islamiah (JI) and Jemaah Anshar Khilafah terror networks, as well as the Abu Sayyaf, operate. 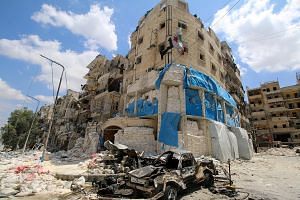 "These are existing sanctuaries that the Islamic State would love to plug in," said Mr Patrick Skinner from New York-based security consultancy The Soufan Group (TSG).

"There is no such thing as a clandestine caliphate, they need sanctuary, they need a place for these people to go to, where they can say: This is where our flag is," he added.

The former case officer with the Central Intelligence Agency was testifying on Wednesday before the US House Committee on Homeland Security about the terrorism threat in the region.

He wrote in a report released by TSG on the same day that while ISIS has yet to establish a South-east Asian wiliyah, or state, "it is likely that it will do so this year, as its grip on Syria and Iraq weakens".

ISIS, he added, is also finding Libya "a difficult place to remain (in) and expand, and it is very possible that places like southern Philippines will be its next priority".

His latest analysis comes after ISIS lost a series of territories as local militias, backed by coalition forces, managed to retake cities from the group in the new year. The last of ISIS' major battlefield victories, for instance, was when it seized Ramadi in Iraq almost a year ago.

"Long-held assumptions about South-east Asia not being fertile ground for violent extremist groups such as Al-Qaeda and the so-called Islamic State tend to downplay the previous several decades of terrorism in the region," he wrote. "Now, concern is building among... the Philippines, Malaysia, Indonesia, and Singapore that the Islamic State has the region in its cross hairs."

Analysts from the International Centre for Political Violence and Terrorism Research at the S. Rajaratnam School of International Studies (RSIS) confirmed that ISIS has started a campaign to establish an Islamic caliphate across Asia.

Mr Jasminder Singh and Mr Muhammad Haziq Jani said in a report that to fulfil the vision of a caliphate, ISIS founder Abu Bakr al-Baghdadi affiliated militant groups in South-east Asia with his group's doctrines, "turning them into a unified force".

While terrorism - whether perpetrated by ISIS or JI - will not be eradicated any time soon, Dr Joseph Liow said in a report yesterday that the threat remains "at a low level".

"One possible factor that could prompt a change is a deliberate shift of attention of ISIS central to South-east Asia," said the RSIS dean, who also spoke before the committee in Washington. "This, however, seems unlikely for now as ISIS is preoccupied with its immediate priority of holding ground in Iraq and Syria, and expanding its fight to Libya and Europe."

Dr Liow said while governments in the region today are better prepared to deal with terrorism compared with 15 years ago, "capacity can... be further improved with cooperation among themselves, and with some help from the United States".

A version of this article appeared in the print edition of The Straits Times on April 30, 2016, with the headline 'ISIS 'may set up caliphate in S-E Asia''. Subscribe
Topics:
More
Whatsapp Linkedin FB Messenger Telegram Reddit WeChat Pinterest Print Purchase Article Copy permalink