The Islamic State in Iraq and Syria (ISIS) had directly funded the Jan 14 attack in downtown Jakarta, according to new evidence uncovered by the Indonesian police.

Money was also sent by the militant group to finance two other terror cells in Indonesia, that were plotting similar attacks in the country.

Their targets: police posts and stations, an international school and the Soekarno-Hatta international airport in the capital, as well as Bali and other places frequented by Westerners and the local Shi'ite community, said Jakarta police chief Tito Karnavian.

"So it is wrong if we are saying that the (Jakarta) attack or the other plots are local initiatives," he said. "They are connected to ISIS through three intermediaries." 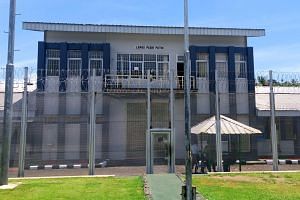 Jailed militants to be charged over attacks

He was referring to Indonesian militants Bahrun Naim, Bahrumsyah and Salim Mubarak Attamimi alias Abu Jandal, who are in Raqqa, Syria, fighting for ISIS.

The three are also followers of ideologue Aman Abdurrahman, who is suspected to have orchestrated the recent strike on Jakarta from prison.

Aman, who had pledged his allegiance to ISIS, is said to have communicated with the group's leadership in Syria from his jail cell using a contraband mobile phone.

The movement of funds was revealed by the former commander of Detachment 88 (Densus 88), the elite counter-terrorism unit of the police, during his keynote speech at the Syarif Hidayatullah State Islamic University on Thursday.

Disclosing details of the money trail, Inspector-General Tito said the funds were channelled separately by the three intermediaries into the hands of local militants, with orders from ISIS to mount strikes in Indonesia.

This was discovered during the interrogation of six or seven key suspects, most of whom were arrested recently in raids aimed at dismantling the local terror network in the wake of the Jan 14 siege of the capital.

However, the first signs of ISIS elements being involved in terror plots in Indonesia had emerged weeks before the strike. This, after intelligence of an impending attack led police to arrest local militant Arif Hidayatullah in December last year.

The police had seized bomb materials from Arif, who admitted that he was planning a terror strike during the year-end celebrations, according to Inspector-General Tito.

He said Arif confessed that he had received an order to plan an attack from Bahrun Naim, who also transferred money to him from Syria to fund the plot.

Bahrumsyah also did the same, transferring about one billion rupiah (S$105,000) from Syria to a local man named Hendro Fernando. Police had seized nine firearms from Hendro, said Inspector-General Tito.

He said Hendro was contemplating attacks in Bali, as well as at an international school and the Soekarno-Hatta airport in Jakarta.

Although the police had foiled the attack plans of the terror cells set up by Arif and Hendro, a third cell put together by Nazarudin Mukhtar, alias Abu Gar, gave them the slip. This was the cell comprising the "Jakarta Four" of Sunakim and Ali, as well as Dian Joni Kurniadi and Ahmad Muhazin, which mounted the recent hit in the heart of the capital.

Inspector-General Tito said Aman had summoned Abu Gar to Nusakambangan prison where he was serving time, to pass on a message from ISIS.

"Abu Gar said Aman Abdurrahman told him, 'We have to copy the Paris attack because it is an instruction... from ISIS'," said the inspector-general, adding that 200 million rupiah for the attack was later sent by Abu Jandal in Syria to Abu Gar last year.

This information was extracted from Abu Gar after he was arrested with five others on Feb 19 during a raid by Densus 88 in Malang, East Java.

The PPATK, Indonesia's anti-money-laundering agency, estimates that terrorism-linked funds worth more than 10 billion rupiah have been transferred from overseas into the country between 2014 and last year.

Inspector-General Tito said local terror cells will continue to rely on ISIS for ideology, financing and training. "Whatever is happening today in Indonesia is a spillover of problems from beyond our territory, it is from Syria and Iraq," he said.

"As long as ISIS exists, the problem of Islamic radicalism in Indonesia will exist as well."