If Singapore wants to assist Indonesia in its fight against illegal forest fires, it should just do so and stop talking about it, said Indonesian Vice-President Jusuf Kalla.

"Go ahead, we are open," said the elder statesman, who was speaking to Indonesian reporters on Sunday in the middle of his trip to New York. "Singapore can come and see for themselves if they want to help. Don't just talk."

This was the second time Mr Kalla has addressed the issue.

The first was on Sept 15, just after Singapore Defence Minister Ng Eng Hen said Indonesia had accepted Singapore's help to put out the fires that led to the haze. 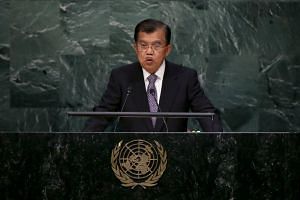 Mr Kalla's latest comments, reported by Antara news yesterday, seemed to suggest that the door was never closed to Singapore's earlier offer to aid Indonesia in its battle against the fires raging in two of its territories.

However, there remain doubts over whether Mr Kalla's words carry any weight with his Cabinet colleagues. After all, Indonesia has declined Singapore's offer of assistance three times.

In declining Singapore's help for the first time earlier this month, Environment and Forestry Minister Siti Nurbaya Bakar said Indonesia had enough resources to deal with the crisis.

Singapore's assistance package, tabled by Dr Ng, had comprised a C-130 military transport plane for cloud seeding, up to two more C-130s to ferry a firefighting assistance team to Indonesia, and a Chinook helicopter with a water bucket for aerial firefighting.

On Sept 18, Ms Siti said "one more water-bombing unit from Singapore would not make much difference... unless if it's, say, 20 units... then that would be good".

The haze from illegal forest fires in Sumatra and Kalimantan has blanketed parts of Indonesia, Malaysia and Singapore for weeks.

Indonesia has deployed thousands of soldiers and policemen to fight the fires, and initiated several criminal investigations into firms and individuals in connection with the fires, which have sent air pollution levels in the region soaring.

Flights at airports in Malaysia have been delayed, schools have been forced to close in Singapore, and tens of thousands of people in Sumatra have fallen ill with respiratory problems from the thick smoke.

Despite the adverse effects of the transboundary haze, some of its leaders continue to maintain that Indonesia need not apologise for the crisis. This even though neither Singapore nor Malaysia has asked Indonesia to do so.

"All this while, there has been supply of oxygen for nine months," he said.

Mr Teten's remarks echoed earlier comments by Mr Kalla in March this year, when he rapped neighbouring countries for complaining about the haze, asking them to be grateful instead for the clean air they enjoy for the rest of the year.

"For 11 months, they enjoyed nice air from Indonesia and they never thanked us," he said at the time. "They have suffered because of the haze for one month and they get upset."

Meanwhile, The Jakarta Post reported yesterday that Foreign Minister Retno Marsudi has reached out to her Singapore counterpart to explain the steps that Indonesia had taken to counter the effects of the crisis.

"Indonesia is very serious about solving the issue and the efforts include law enforcement and education," she said.

In the original article, it was reported that Singapore Civil Defence Force (SDCF) will send a land firefighting team to Indonesia. SCDF has clarified  that it is a firefighting assistance team.

A version of this article appeared in the print edition of The Straits Times on September 29, 2015, with the headline 'Indonesian V-P: If S'pore wants to help, do it and 'don't just talk''. Subscribe
Topics:
More
Whatsapp Linkedin FB Messenger Telegram Reddit WeChat Pinterest Print Purchase Article Copy permalink