The emergence of a terrorist cell in West Java, capable of assembling bombs and acquiring military-grade explosives and foreign funding, is an escalation of the terror threat in South-east Asia, security analysts said. Police said yesterday that the group was planning to strike during the December holidays.

"The Indonesian police are working with Interpol to trace where (the funds came) from," said national police spokesman Boy Rafli Amar yesterday.

That the group had initial plans to carry out attacks on multiple targets, and supply their home-made bombs to other militants in the country, confirms that the war on terror is far from being won.

The group had plans to attack the Parliament building, police headquarters, local television stations, a Buddhist temple and the Myanmar embassy in Jakarta. The Straits Times understands that the Myanmar mission was targeted because of Naypyitaw's alleged oppression of the Rohingya Muslim minority. 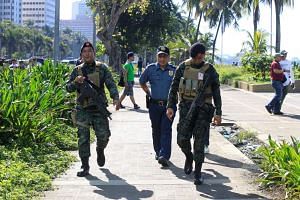 Inspector-General Boy said the group had first hatched a plan to build a lab to make shabu-shabu - the local street name for crystal meth, or methamphetamine - and sell the synthetic drug to raise funds for its terror activities.

ISIS could possibly be finished in the Middle East but is South-east Asia ready for the returnees?

MR JASMINDER SINGH, senior analyst from the International Centre for Political Violence and Terrorism Research, on the growing number of militants in the region, many of whom are loyal to ISIS.

"The plan somehow changed, and they went ahead with making bombs, which they planned to use themselves or sell them to other terror networks that needed them."

So far, four members of the group have been arrested. They are Rio Priatna Wibawa, Saiful Bahri, Bahrain Agam and Hendra Rizki.

The police said they are followers of Jemaah Ansharut Daulah (JAD), an offshoot of the old Jemaah Islamiah terror network loyal to the Islamic State in Iraq and Syria (ISIS).

JAD is purportedly led by Aman Abdurrahman - a jailed ideologue who managed to order his followers from prison to attack Jakarta on Jan 14. The perpetrators of the hit were killed during a siege, but at least 17 others have been charged with supporting the attack.

Rio, 23, is a farmer who lives in Majalengka. He was arrested last Wednesday at his home. Saiful, 30, and Bahrain, 36, were nabbed during follow-up operations over the weekend in the provinces of Banten in Java and Aceh in Sumatra, respectively. Hendra, 24, was arrested in Tangerang near Jakarta but the police did not say when.

Their plot was thwarted by Detachment 88, an elite police counter-terrorism unit, last Wednesday when they busted a bomb-making lab in Rio's home.

During the raid, military-grade explosive material such as TNT and RDX - in quantities large enough to cause twice the damage done in the 2002 Bali bombings - were seized. RDX is a component of C4, an explosive typically used only by armed forces. Airsoft rifles, daggers, bows and arrows were also found.

"There is certainly a market for these weapons in the region, such as in the Philippines, where the Abu Sayyaf (militant group) is based," said Mr Jasminder Singh.

The senior analyst from the International Centre for Political Violence and Terrorism Research added that the growing number of militants, many loyal to ISIS, and the discovery of their inventories, are "over-stretching" security agencies in the region.

"ISIS could possibly be finished in the Middle East but is South-east Asia ready for the returnees?"