The contrast in the narratives projected by the Bharatiya Janata Party and anti-Citizenship Amendment Act protesters brings out a sharply polarised society, says the writer.

DHAKA (THE DAILY STAR/ASIA NEWS NETWORK) - It has been more than a fortnight that the pan-India protests against the contentious Citizenship Amendment Act (CAA) have been going on.

The violence and police firing that have often accompanied the agitation snuffed out more than 20 lives.

On Dec 19, the country witnessed the most extensive protests with tens of thousands of people hitting the streets across cities defying prohibitory orders.

The scale and intensity of the protests have come down since Indian Prime Minister Narendra Modi's speech at a public rally in Delhi focusing mainly on the CAA and the proposed National Register of Citizens (NRC).

Nonetheless, the agitation is on. Part of the reason for a lull could be the Christmas and year-end holidays before street protests gain momentum again.

There are reports that the opposition parties and civil society groups are in the midst of planning how to intensify the protests.

The protests in the first two weeks had largely been loosely-coordinated attempts by those opposed to the government and remained confined mainly within university campuses before the political parties took the headlong plunge against CAA/NRC with the Left parties, marginalised in Indian politics, taking the lead.

The political battle lines were firmly drawn with Modi's massive rally in Delhi's Ramlila Maidan on Dec 22 ostensibly to launch the ruling Bharatiya Janata Party's (BJP) campaign for Delhi assembly elections due in February next year, followed by a huge street march by the party's Working President JP Nadda in Kolkata in support of CAA and the top Congress leaders' sit-in at the memorial of Mahatma Gandhi at Raj Ghat in Delhi against the changed citizenship legislation on the same day.

The nearly 90-minute speech by Modi at the Ramlila Maidan was by far his most lengthy enumeration of the views on CAA/NRC from the highest echelon of the government. 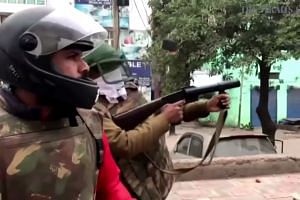 It marked an aggressive launch of the BJP's "mass contact" drive across the country to counter the anti-CAA/NRC protests, underlining the fact that the agitation could not be dismissed as a feeble push-back by the Left-Liberal camp, defeated by a wide margin in parliamentary elections just seven months ago.

There was also recognition in the BJP that it was late at least by a week in taking to the field in countering the anti-CAA/NRC protesters, allowing a perception to grow that it was being defensive on the issue.

So, the party sought to overcome that by fielding no less than the prime minister to make up for the time lost.

On Christmas day, coinciding with the late BJP leader and former PM Atal Bihari Vajpayee's birth anniversary, Modi launched a sharp attack on those who indulged in arson and other forms of violence targeting public and private properties during the anti-CAA/NRC agitations.

This contrasted starkly with the anti-BJP forces' allegation that the BJP government unleashed repression on agitators using the police apparatus.

There is recognition on both sides of the political spectrum that if images of destruction of railway stations, empty trains and vehicles dented the agitators' cause and image on the one hand, the strong-arm tactics by the police and death of the protesters also did not help the government either.

The prime minister's focusing on vandalism in his speech in Lucknow was aimed at pinning down the opposition and calling into question the method of the anti-CAA/NRC opponents.

The choice of Lucknow to amplify the focus on vandalism is significant because Uttar Pradesh had seen the worst violence and the highest number of casualties (19) among the Indian states.

Most importantly, and worryingly, the contrast in the narratives projected by the BJP and anti-CAA/NRC protesters brings out a sharply polarised society.

The BJP government in Uttar Pradesh has adopted a tough response to violent protests, arresting over 1,000 and detaining more than 5,500 people and also setting in motion the process of attaching the properties of those who indulged in violence for recovery of the amount to compensate damage to public properties.

1) He sought to reach out to Muslims by assuaging their fears that CAA would take away citizenship and that NRC would de-recognise them as Indian citizens.

2) He tried to de-hyphenate CAA and NRC as coupling of the two has caused the fears among Muslims.

3) He pointed out that NRC has neither been brought up in parliament nor before the cabinet.

4) He put up a strong defence of CAA.

5) He tore into the opposition for "spreading rumours and fear" about CAA and NRC.

6) He tried to draw the opposition parties into a polarising debate by asking them to spell out what they had against the members of religious minorities who came from Bangladesh, Afghanistan and Pakistan and took shelter in India.

The opposition is aware of the problem of joining the polarising debate because, by doing so, it risks losing ground in the event of an electoral backlash from the majority community.

It is for this reason that the opposition has tried to frame the NRC as an "anti-poor" issue and equated it with the 2016 demonetisation policy which caused economic hardships by banning big currency notes.

A number of opposition leaders including Sonia Gandhi, Priyanka Gandhi (both Congress), Sitaram Yechury (CPI-M), Akhilesh Yadav (Samajwadi Party) and Arvind Kejriwal (Aam Aadmi Party) pointed out how millions of people were made to stand in long queues before banks to return banned notes and how a similar story could be repeated in the case of NRC when people line up for procuring documents to prove their citizenship.

What is perhaps forgotten that demonetisation did not prevent the BJP from returning to power for a second term (in national polls in 2019).

The prime minister's remarks on NRC at the Ramlila Maidan meeting, which appear to suggest that it is not happening anytime soon, must be seen in the context of reservations about NRC voiced by some of BJP's allies like Janata Dal (U) and Lok Janshakti Party and some other non-NDA and non-UPA regional parties.

The question is: can the BJP afford to burn bridges with these allies by pushing NRC down their throats?

To sum up, high politics has begun playing out over CAA and NRC as we are about to step into a New Year.