Indonesia's Central Kalimantan province continued to be shrouded in thick haze as the Pollutant Standards Index in its capital Palangkaraya rose to 1,917 before sensors stopped sending updates after 11am yesterday.

The province has been the worst hit by forest fires raging over land embedded with coal deposits that make them almost impossible to put out during this dry spell. This has led to a spike in the number of hot spots recorded by the Ministry of Environment and Forestry, particularly in September this year.

Data from the ministry show that Central Kalimantan - on Borneo island - registered 12,327 hot spots in September this year, compared with just 5,574 fires in the same month last year. South Sumatra, the other badly hit province, on Sumatra island saw about 11,450 hot spots, more than three times the number in the same period last year. This brought the total number of hot spots in September to 39,672 this year, compared to just under 15,000 fires recorded last year. 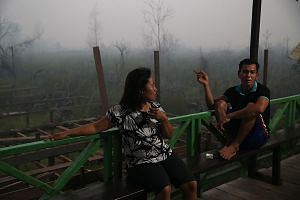 Respiratory cases up but most residents shrug off bad air

Central Kalimantan is struggling to deal with the haze that forced schools to close again after they reopened for one day on Friday. Schools had previously been forced to close for a record three weeks from Sept 10. "We water-bombed the fires in Pulang Pisau regency on Friday, but the fires re-emerged at the same spots this morning, coming from underneath," Ms Rani Anggraini at the Central Kalimantan governor's office told The Sunday Times by telephone yesterday.

A much larger amount of water - possible only through rains induced by cloud seeding - is needed to put out the fires in Pulang Pisau, where the layers of peatland can reach more than 5m deep. "We are closely monitoring (the situation). Cloud-seeding operations will start as soon as Central Kalimantan has clouds," Ms Rani said.

On Friday, clouds that had the potential to be seeded formed above Central Kalimantan. But they did not stay for long before they were broken up by winds and blown towards West Kalimantan province and Sumatra island, she added.

Cloud seeding in Central Kalimantan may only be possible above Pangkalan Bun city, which is to the west of the province near the border with West Kalimantan and about 400km west of Pulang Pisau. But the areas most hit by fires are to the south and south-east of the province.

Thousands of troops have been deployed in Sumatra and Kalimantan to help douse fires.

Environment and Forestry Minister Siti Nurbaya Bakar has underlined three challenges in fire fighting operations. They are: The availability of ground water to douse fire is declining and the prolonged dry weather - coupled with high temperature - is worsening the fires. In addition, ground fire-fighting crew have started to have their health affected due to exhaustion and exposure to haze.