Some in HK believe it can be, but pinning hopes on this will lead to tragedy, he says

Some Hong Kongers believe the city can be autonomous from China, but that is an illusion, Singapore's former foreign minister George Yeo said yesterday.

And pinning their hopes on it is dangerous as "it must lead to tragedy", he pointed out at a dialogue organised by Hwa Chong Institution as part of its centenary celebrations.

The reason is that when the "one country, two systems" principle by which Hong Kong is governed lapses in 2047, the next version of that system is in China's hands.

Referencing the great Chinese classical novel Journey To The West to make his point, he drew an analogy between Hong Kong and the Monkey King Sun Wu Kong.

"The monkey was very lively, sometimes very naughty. He would leap 10,000km and still, he cannot leave the Buddha's palm.

"Hong Kong cannot leave the Buddha's palm. If, one day, the Buddha decides to put a ring around the forehead of the monkey, then the monkey will have to take note," he told teachers and students from various schools at the dialogue moderated by Mr Warren Fernandez, editor-in-chief of Singapore Press Holdings' English/Malay/Tamil Media Group and Straits Times editor.

In the classic, Sun Wu Kong wore a magical circlet around his head that he could not remove. His master, Buddhist monk Tang Sanzang, would chant a sutra to constrict the circlet to discipline the Monkey King.

Mr Yeo, who was chairman of Hong Kong company Kerry Logistics Network, gave the illustration in a reply to a student from China who had asked why he thought Hong Kongers have a spirit of resistance and why they act in a way that cannot solve their problems. 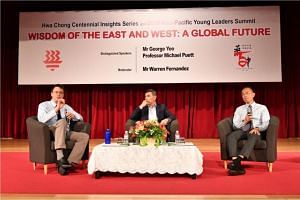 Chinese troops can be deployed to restore order in HK, says Beijing in warning to protesters

In response, he said that when Hong Kong was still a British colony, the education system did not encourage the people to be patriotic towards mainland China."I have been told by some young friends... that in primary schools and high schools in Hong Kong, almost all the teachers are anti-mainland. For a student leader in any of the universities to win elections, you need to be anti-mainland. This has seeped into the mentality of the Hong Kong people."

Mr Yeo also said Hong Kong's society is going through a "wrenching period", with families, friends and political parties divided. "If people focus on what they want Hong Kong to be in 2047, they will find a common ground."

In his keynote address, he said Hong Kong still has a "great future" because it is useful to China. But with the proviso that neither Hong Kong nor Macau tries to change mainland China, he added. "As long as they are separated, that is fine, but if it becomes a point of infection, that is a different matter. They will have to extinguish you. This is the reality."