Heads are rolling in Corporate Malaysia, as the axe falls on chiefs of institutions and state-linked firms accused of using their positions in a failed attempt to keep then Premier Najib Razak in power.

The Mahathir administration's housekeeping has seen the chiefs of the central bank and national telecommunications provider as well as a powerful director of state oil giant Petronas being swept out the door in less than a day, but more are expected to follow in their wake.

But while the market will likely get over the initial shock of such sweeping changes, investors are watching closely for the names of replacements to indicate if these are efforts at policy change or driven by revenge and the expediency of rewarding loyalists.

"While these latest developments should help restore credibility to Malaysia's institutions, Mahathir inevitably wants his own people in top state jobs," said risk consultancy Eurasia Group's Asia director Peter Mumford. "We are concerned that decisions will be excessively driven by vengeance, with any policy, institutions or people closely associated with Najib dismissed regardless of their merits."

Some of these changes have been expected after the May 9 elections which saw a shock change of government. Both Bank Negara governor Muhammad Ibrahim and Telekom Malaysia (TM) chief executive Shazalli Ramly have suffered due to links with the Najib administration and unpopular decisions. TM shares rose as much as 10.5 per cent yesterday on the back of the leadership change.

But a replacement at the central bank has yet to be decided, and adds to uncertainty in the market, which has seen foreign funds pull out about RM6 billion (S$2 billion) from the local bourse in May alone.

Other purges are less straightforward. Petronas has consistently performed across more than four decades in existence. Aside from director in charge of remunerations Omar Mustapha Ong who resigned yesterday, chairman Sidek Hassan's contract is not expected to be renewed at the end of the month, and they are both Najib appointees.

The next cohort reported to be headed for the exit is set to include Bursa Malaysia chief executive Tajuddin Atan - whose seven years in charge has seen robust growth in the Kuala Lumpur stock exchange. 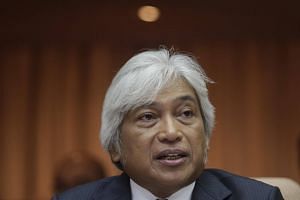 The Straits Times understands that other top brass in government investment funds such as Khazanah and Permodalan Nasional Berhad have also sought assurances over their positions.

"They have met with leaders of the new government, including the Council of Eminent Persons," a source said, referring to Prime Minister Mahathir Mohamad's team of advisers led by his confidant and former finance minister Daim Zainuddin.

"Tellingly, other Bank Negara officials aside from the governor have been meeting the council and also attending briefings by the council for investors," the source said.

Tan Sri Muhammad would have seen the writing on the wall, given the new administration's insistence that the central bank's RM2 billion purchase of government land in January this year was to bail out financially strapped state fund 1Malaysia Development Berhad (1MDB).

The government has pursued the 1MDB scandal relentlessly, with Datuk Seri Najib on a no-fly list and his various homes raided.

Businessman Low Taek Jho - whom Home Minister Muhyiddin Yassin yesterday called the "main criminal" in the saga - said he has "instructed his lawyers to make contact with" the graft busters.

Mr Low is accused of being the mastermind behind 1MDB, which United States investigators say had resulted in US$4.5 billion (S$6 billion) being siphoned out of the state investment fund.

A version of this article appeared in the print edition of The Straits Times on June 08, 2018, with the headline 'Heads roll at some of Malaysia's biggest firms'. Subscribe
Topics:
More
Whatsapp Linkedin FB Messenger Telegram Reddit WeChat Pinterest Print Purchase Article Copy permalink