The transboundary haze crisis, which has sent air pollution levels soaring, is on course to set a new precedent with the US National Aeronautics and Space Administration (Nasa) the latest to say it could become one of the worst on record.

Palangkaraya, the capital of Central Kalimantan - one of the hardest hit by smoke from raging forest fires in Indonesia - yesterday had a Pollutant Standards Index (PSI) level that hit 1,936. In Indonesia, a PSI reading of 350 and above is considered hazardous. It takes a far lower reading for schools to be closed.

Thousands of troops and policemen have been deployed to fight forest fires in Kalimantan and Sumatra, the other island where fires are burning on peatlands starved of moisture due to the lack of rain.

HAZE A PROBLEM FOR OVER 40 YEARS

The Indonesian national police have arrested hundreds of suspects and started probes into several plantation firms in connection with the use of outlawed slash-and-burn techniques to clear land. Canals with dams in fire-prone areas are being built to prevent peatlands from drying out in the dry season.

These measures, observers told The Straits Times earlier this week, are by far the most wide-ranging effort by any Indonesian government in dealing with the annual haze crisis since 1997. 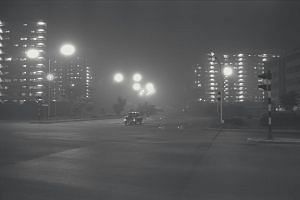 Haze in Singapore: A problem dating back 40 years

However, Nasa warns that the prolonged dry season ahead means air pollution levels in the region may be among the worst on record.

"Conditions in Singapore and south-eastern Sumatra are tracking close to 1997," said Dr Robert Field, a Columbia University scientist based at Nasa's Goddard Institute for Space Studies, in an Agence France-Presse report yesterday.

"If the forecasts for a longer dry season hold, this suggests 2015 will rank among the most severe events on record." 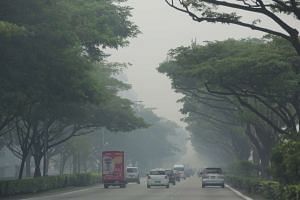 Palangkaraya-based weather forecaster Roland Binery told The Straits Times that the haze in the area worsened again yesterday because there were new fires developing and spreading in the Tumbang Nusa and Pulang Pisau areas.

"The prevailing wind blew from the south carrying the smoke from there to Palangkaraya," he said.

Singapore's Ministry of the Environment and Water Resources (MEWR) said yesterday that it had reiterated on Thursday the country's offer of help to tackle the fires, including providing aircraft to conduct water bombing and cloud-seeding operations.

"Indonesia clarified at the meeting that it had enough resources of its own and did not need to call on the assistance offered by Singapore at this time," said MEWR, referring to the high-level meeting between Singapore and Indonesia on Thursday, initiated by the Indonesian government.

A version of this article appeared in the print edition of The Straits Times on October 03, 2015, with the headline 'Haze crisis set to be 'one of the worst on record''. Subscribe
Topics:
More
Whatsapp Linkedin FB Messenger Telegram Reddit WeChat Pinterest Print Purchase Article Copy permalink