Indonesia is in a bind over the prospect of Hambali, one of the deadliest terrorists from the country, being sent home from Guantanamo Bay where he has been held by the United States since 2006.

The former operations chief of the Jemaah Islamiah (JI) terror network, who is an Indonesian citizen, may be repatriated if US President Barack Obama succeeds in shutting down the detention centre, also known as Gitmo.

Mr Obama on Feb 23 announced his plan to close the facility in Cuba, which for years has been synonymous with the rendition of suspected Islamists and the torture of detainees.

He added that it was time to decommission the military prison because it undermines the country's national security and was against its values and interests. 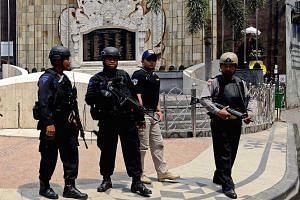 No easy way to deal with Guantanamo detainees

At its peak, Gitmo housed more than 700 terror suspects, most of whom were captured in the aftermath of the Sept 11, 2001, attacks in New York and Washington.

There are now only about 91 detainees left and Hambali, the chief architect of the Bali bombings which killed 202 people in 2002, is among three detainees from South-east Asia still being held in the controversial facility.

The remaining two - Mohd Farik Amin alias Zubair, 41, and Mohammed Nazir Lep alias Lillie, 39 - are Malaysians involved in an Al-Qaeda plot to crash a plane into Los Angeles after the 9/11 attacks.

Indonesia's constitutional court has previously ruled that laws, such as the 2003 Anti-Terrorism Bill, cannot be applied retroactively.

MR ADHE BHAKTI, counter-terrorism expert, noting that any revisions to Indonesia's anti-terror laws will not be applicable to Hambali

Indonesia, still recovering from the Jan 14 terror attack on its capital Jakarta by domestic militants linked to the Islamic State in Iraq and Syria (ISIS), does not want Hambali back.

The Straits Times has learnt that a ministerial-level meeting is being held today in Jakarta to discuss how he can be denied entry to his country of birth.

A source close to the Joko Widodo administration, who asked not to be named, said the government is concerned that Hambali's return may rejuvenate domestic terror cells, particularly remnant elements of the disbanded JI network.

"Indonesian militants, whether they are former JI or followers of Aman Abdurrahman, will see Hambali as their new leader even if he is imprisoned here, and that may pose a threat to Indonesia's security," said the source.

Aman is the jailed cleric believed to have ordered the recent terror attack in Jakarta.

Indonesia is now in the process of reviewing its anti-terrorism law, introduced in 2003 following the bombings in Bali.

Proposed revisions being discussed by lawmakers include revoking the citizenship and barring entry of any Indonesian who engages in terrorism activities overseas.

Counter-terrorism experts such as Mr Adhe Bhakti, however, said even if passed, the new laws will not apply to Hambali.

"Indonesia's constitutional court has previously ruled that laws, such as the 2003 Anti-Terrorism Bill, cannot be applied retroactively," he said.

Still, the 50-year-old JI operative can be charged with premeditated murder under Indonesia's criminal code because there is evidence that Hambali was "the mastermind" of the Bali incident, said Mr Adhe.

"Prosecutors would seek at least a life sentence for him," he added.

These arguments, however, are premature, say some experts.

A key part of Mr Obama's plan to close Guantanamo Bay is to redistribute the remaining detainees, mainly those the US still wants to hold, to 13 prisons across the country and six other detention centres on military bases.

That proposal, however, has attracted strong opposition from US lawmakers.