While more than a thousand Muslim hardliners rallied outside the courthouse yesterday to call for his head over allegations of blasphemy, Jakarta Governor Basuki Tjahaja Purnama was in a small but packed courtroom, making an impassioned plea for his innocence.

Reading from a prepared script to register his "not guilty" plea before the judges, the Chinese Christian politician choked with emotion and wept as he mentioned his intimate ties to a Muslim family that he said had adopted him when he was a boy.

"I am very sad that I have been accused of insulting Islam because the allegations are tantamount to saying I defamed my own adoptive parents and siblings who I love, and are very dear to me," said Basuki, better known as Ahok in Indonesia.

His detractors watching him on live television yesterday will undoubtedly see him playing the Muslim card to show that he is one of them and, therefore, could not possibly have intended to insult Islam when he cited the Quran to dismiss opponents who said the holy book forbids Muslims from electing a non-Muslim leader. 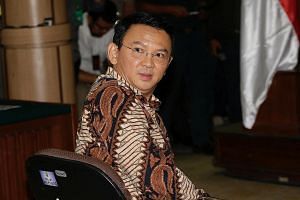 Whether he is guilty of blasphemy is now the subject of court proceedings, which lawyers do not expect to conclude any time before next February's gubernatorial election.

Analysts have said the hearing and protests by Muslims against him in recent months have thrust issues of race and religion to the forefront of next year's regional elections, which will be held across the nation.

But is this debacle purely about racial and religious tolerance in a country with not just a Muslim majority, but alsothe largest Muslim populationin the world?

Observers say no, adding that there are many undercurrents, or arus bawah in local jargon, that cannot be ignored.

"While grievances with Ahok should not be dismissed as purely religiously driven - claims of corruption and policies biased towards the middle-class ethnic Chinese minority are allegedly aplenty - mass mobilisation was possible precisely because of the use of religious rhetoric," said Ms Nursheila Muez, an inter-faith research analyst from the S. Rajaratnam School of International Studies.

There is also an ideological war that started recently with the struggle between the reformists and the "entrenched interests", said ISEAS - Yusof Ishak Institute visiting senior fellow Leo Suryadinata.

The reformists are Indonesian President Joko Widodo and Basuki, his close ally and deputy when he was Jakarta governor.

The latter was Mr Joko's rival during the 2014 presidential election, while the former has, at best, a tenuous relationship with his elected successor.

"The entrenched interests are using Islam, including the militant version of the religion and its adherents, to counter the reformists, as it is difficult, if not impossible, to get rid of the reformists using just secular issues," said Dr Suryadinata.

The anti-Ahok protests, including the Dec 2 rally that attracted more than 200,000 Muslims, reflect the tension that Dr Suryadinata referred to.

The arrest of 10 political activists - many with ties to Dr Yudhoyono and Mr Prabowo - accused of inciting the protesters to topple the government during the rally, was yet another clear indication of a sinister power play beneath the surface of the Jakarta gubernatorial race.

While such manoeuvres are not uncommon in Indonesian politics, tapping Islamic ideology in a country where extremism has been known to rear its ugly head is a dangerous game, said analysts.

There is still a long way before the court will rule on Basuki's case or investigations against those rounded up for treason will end.

What is at stake, however, is not only Basuki's bid for re-election or the fate of the alleged dissidents, but also Indonesia's standing as a global beacon of moderate Islam and democracy.

"Beneath the politics, Indonesia is engaged in a quiet but vital ideological struggle, one between the idea of a Muslim state and that of a more pluralistic vision of a multi-religious Indonesia," said Dr Suryadinata.

A version of this article appeared in the print edition of The Straits Times on December 14, 2016, with the headline 'Governor's indictment: Not a simple matter of religion'. Subscribe
Topics:
More
Whatsapp Linkedin FB Messenger Telegram Reddit WeChat Pinterest Print Purchase Article Copy permalink