Analysts point to April polls as reason for cleric's parole, warn of danger he still poses

The Indonesian government made a bold statement three years ago when it put five of the most dangerous radical clerics in isolation cells to limit their influence beyond the prison walls.

Visitation rights were tightened, with only immediate family allowed. But now, with the election approaching, the most senior among these five - 80-year-old Abu Bakar Bashir - has received President Joko Widodo's blessings for release on parole on humanitarian grounds.

Two academics told The Straits Times that the move by Mr Joko, who is seeking re-election in April, is a political call as he woos Islamist votes. But this will have repercussions, they warned.

The controversial decision was meant to counter accusations by certain quarters that Mr Joko is anti-Islam and that he prosecutes or criminalises ulama, said Dr Noor Huda Ismail, a visiting fellow at the S. Rajaratnam School of International Studies (RSIS).

"It is good for the current political situation. This is a short-term political decision with challenging long-term repercussions," said Dr Huda, an Indonesian journalist turned academic. He explained that Bashir is considered to be an ulama by certain quarters.

Mr Joko, 57, is set to square off with his only rival, Mr Prabowo Subianto, 67, who has played the religion card and has been seen cosying up to radical clerics during campaigns ahead of the April 17 presidential polls.

They include Muhammad Rizieq Shihab, who is in self-exile in the Middle East to avoid charges by the Indonesian police over violating pornography laws and insulting the state ideology Pancasila. 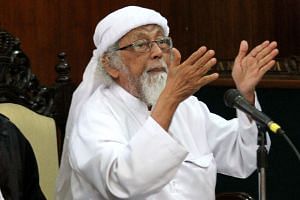 Bashir has been serving his 15-year prison term since 2011 for funding a terrorist training camp in Indonesia's Aceh province.

He is widely seen as the spiritual leader of South-east Asia terrorist group Jemaah Islamiah (JI), which operates underground and continues to expand via online platforms.

JI was the mastermind behind the 2002 Bali bombings that killed 202 people, 80 per cent of them foreigners. JI was also behind several other deadly bombings in Jakarta.

"Like it or not, the parole hurts the victims' families. They still feel the wounds today. They are from various partner countries to Indonesia," Dr Huda told ST. "This is local politics that has ramifications regionally and internationally."

Australia, the United States, Japan and Germany are among the countries whose citizens were killed in the bombings.

Dr Quinton Temby, a visiting fellow in the Indonesia Studies Programme at ISEAS - Yusof Ishak Institute, agrees that the parole given to Bashir is politically motivated.

Dr Temby, an Australian national, said the timing of the early release was probably designed to pre-empt potential criticism of Mr Joko, popularly called Jokowi, over the imminent release of former Jakarta governor Basuki Tjahaja Purnama, whose jail term for blasphemy will end on Thursday.

Basuki, best known by his Chinese nickname Ahok, was sentenced to two years' jail in May 2017 after a Jakarta court found him guilty of blasphemy against Islam. The controversial sentence was handed down weeks after the political ally of Mr Joko lost the Jakarta gubernatorial election to Mr Anies Baswedan.

Dr Temby said: "We can see (the parole) as a piece with Jokowi's confused strategy in dealing with the Islamist mobilisations around the Ahok blasphemy case."

Bashir's conditional release, according to Dr Temby, is unlikely to contribute to regional terrorism because in the Islamic State of Iraq and Syria (ISIS) group, he was more of a follower than a leader and his family is aligned against the group.

"But the political timing of his release will help to burnish his image as the elder statesman of militant Islamism in Indonesia, even if it is an image that he lacks the charismatic authority to live up to," added Dr Temby, whose research interests cover Indonesia's political Islam and elections.

Mr Brailey said Bashir's release is unlikely to have any wider impact in the region among the network of Salaafi Jihadist groups with active operational cells.

The groups, represented by those including JI and ISIS, believe in strict Islamic laws and violently spread and implement their ideology. Unlike ISIS, JI no longer sees Indonesia as a battleground and its members do not consider everyone else outside their group, including Muslims, as apostate (an ideology called Takfiri).

Members of JI, an Al-Qaeda-linked organisation, do not get along with those affiliated with ISIS. There have been reports of brawls between JI-affiliated inmates and ISIS-affiliated inmates in prisons across Indonesia. Their rivalry here reflects a turf war between ISIS and Al-Qaeda in the Middle East and everywhere else.

"Bashir's influence and impact have waned significantly since the days of Jemaah Islamiah..." Mr Brailey told The Straits Times.

Bashir is the founder of Al Mukmin Islamic boarding school in Solo, more commonly called Ngruki, which is known for producing militants.

Dr Huda, an alumni of Ngruki and working to help with counter-terrorism efforts, said that although Bashir's influence has weakened and he is frail, there is still a possibility that he may revive his violent ideology as well as his terror networks locally and overseas.

Bashir's own family members remain disappointed with his oath of allegiance to ISIS and should they manage to convince him to recant before his death, this may boost the standing of those who remained steadfast outside, Mr Brailey said, referring to those who do not support ISIS' caliphate claim.

"But if history teaches us anything, it is to be wary of the dying jackal. Those of us working on countering violent extremism in the region would do well to watch for signs of Bashir's messages of hate and intolerance taking traction, and to actively challenge the lies and deceit of this kind of ideologue," Mr Brailey added.