Two people - who died of heart attack and fatigue, respectively - were residents of Lebak regency in Banten province, and another died because of panic in Pandeglang regency in the same province, the agency said in a statement.

Another two Indonesians who died were from Sukabumi regency in West Java province, it said.

Three of the four injured were found in Pandeglang, while another one was in Sukabumi.

At least 223 houses and 10 buildings, including places of worship and schools, across the provinces of Banten and West Java were destroyed, according to the agency.

BNPB chief Doni Monardo visited Pandeglang yesterday, and warned that the number of casualties would continue to rise.

"The damage that we've monitored hour by hour keeps increasing," he was quoted as saying by Detik news.

Indonesia's Meteorology, Climatology and Geophysics Agency (BMKG) on Friday issued a tsunami warning after the 6.9-magnitude quake struck at a depth of 48km, with waves predicted to reach 3m in the southern parts of Pandeglang and on the west coast of Lampung.

That prompted residents along the coast to flee to higher ground and those in other affected areas to take shelter in safer places. Jakarta residents also left their homes as buildings in the capital swayed from the force of the tremor.

The BMKG ended its alert 21/2 hours after the major quake.

GETTING WORSE BY THE HOUR

The damage that we've monitored hour by hour keeps increasing. 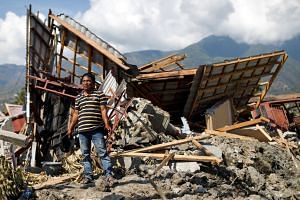 Soon after the quake, President Joko Widodo instructed the authorities to monitor the situation on the ground.

The BNPB sent its emergency response team to the affected regions, such as South Lampung, Pandeglang, Serang, Lebak and Sukabumi, as regional governments conducted assessments along with the military and police in the post-disaster relief.

Social Minister Agus Gumiwang Kartasasmita also visited Pandeglang yesterday, handing out food and tents among other relief items to residents. He promised that the government will hand over financial aid totalling 15 million rupiah (S$1,460) to each family of the deceased.

Indonesia, located in the Pacific "Ring of Fire" where tectonic plates collide, records frequent seismic and volcanic activities, including earthquakes, which are sometimes followed by tsunami.

Last year, a 7.5-magnitude quake and a subsequent tsunami in the city of Palu on Sulawesi island killed more than 2,200 people, while another thousand people were declared missing.