Just over one in every 10,000 orders on Alibaba's Taobao marketplace last year involved suspected fake goods, the Chinese tech giant has said, as it claimed success in reducing piracy on the world's largest e-commerce platform.

In its annual intellectual property (IP) protection report last week, Ali-baba said big data analysis and closer cooperation with brands and law enforcement had snuffed out counterfeiting on Taobao. It is the world's seventh-most visited website, ahead of Amazon, and has 666 million active users monthly.

"Sources of counterfeit goods were put under unprecedented pressure, and the space for counterfeiters was squeezed to a high degree last year," said Alibaba chief of platform governance Zheng Junfang.

For instance, IP rights complaints from brand owners fell 32 per cent last year compared with the year before, said the report. Alibaba also managed to take down 96 per cent of goods suspected of having infringed IPs before any sales were made.

"It was the first time that all indicators in the fight against sales of counterfeits online showed a sharp decline," Ms Zheng added.

In recent years, Alibaba has publicly intensified its fight against counterfeit goods, even going as far as establishing a research institute - on World Intellectual Property Day last April - to set rules for IP protection.

Still, Taobao has consistently been named on a US government blacklist of online and physical marketplaces judged to have facilitated "substantial piracy and counterfeiting".

First put on a US Trade Representative (USTR) list in 2008, Taobao was removed between 2012 and 2015 in recognition of its anti-piracy efforts. But it was back on the Notorious Markets List in 2016, and in the most recent report last year.

While the USTR noted that Ali-baba had taken positive steps to fight piracy, it said a high volume of infringing products reportedly continues to be sold on Taobao. 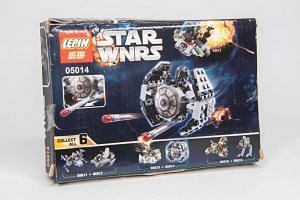 "Alibaba has not identified metrics to assess objectively the scale of infringing products sold on Taobao.com nor objectively demonstrated that the volume or prevalence of counterfeit goods has decreased over the last year," it said.

Data released by Alibaba also does not reflect the scale of the problem on Taobao and is "merely suggestive of progress made", it added.

Alibaba has protested against its blacklisting as scapegoating, and called the list "deeply flawed, biased and politicised".

Experts said counterfeiters have evolved their tactics in their cat-and-mouse game with IP-protection counter-measures on Taobao.

A casual check on Monday showed that fake luxury goods were still easily available on Taobao, but under creative code names.

Counterfeit Gucci jackets were labelled "G-house" and knock-off Ralph Lauren polos were peddled under "Little horse brand". Both logos were blurred out or pixellated to prevent automatic flagging by Taobao.

Counterfeiters were also increasingly hawking their goods on foreign social media, such as Whats-App and Instagram, and through third-party image hosting sites such as Yupoo.

Said Alibaba: "It is extremely urgent that the various platforms and markets, through both online and offline measures, come together and strike back (against counterfeiters)."