HONG KONG • The police commander who oversaw operations against pro-democracy demonstrations that roiled Hong Kong in 2014 has been recalled from retirement to help deal with the current violent protests, two sources told Reuters.

The move comes ahead of yet another weekend of protests across the former British colony, including a three-day rally at the international airport, that have prompted travel warnings from countries including the United States and Australia.

What began as protests against a Bill that would have allowed people in Hong Kong to be extradited to mainland China for trial in courts controlled by the Communist Party have evolved into a broader backlash against the city's government, with flash mob-style demonstrations on an almost daily basis.

Mr Lau's recall suggests that the government lacks confidence in the capacity of the current police leadership to manage the response, the security officials said.

Hong Kong police and the government did not immediately respond to a request for comment.

The police have been increasingly targeted by protesters, who have hurled abuse at officers on the front lines.

Activists accuse the police, who have fired rubber bullets and nearly 2,000 rounds of tear gas to disperse demonstrators, of using excessive force, and have called on the government to launch an independent inquiry into their actions.

Many protests in the past few weeks have degenerated into running battles with the police, who have arrested nearly 600 people since June, the youngest aged 13. 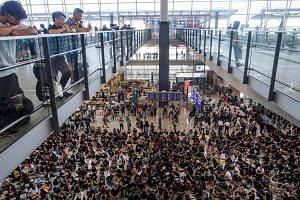 Protests could have tsunami effect on economy: HK leader

The Hong Kong government and the authorities in Beijing have condemned the violence, and said they stand by the police and the city's embattled leader Carrie Lam.

Mr Lau, who retired last November, has been appointed deputy commissioner for special duties, which would give him responsibility for handling the protests, the sources said.

Officers who served with Mr Lau during the 2014 pro-democracy protests that paralysed parts of Hong Kong for 79 days said he was respected by senior commanders for his leadership.

He is widely seen as a decisive officer, according to senior security officials.

A version of this article appeared in the print edition of The Straits Times on August 10, 2019, with the headline 'Ex-top cop recalled from retirement to help deal with violence'. Subscribe
Topics:
More
Whatsapp Linkedin FB Messenger Telegram Reddit WeChat Pinterest Print Copy permalink