The agreement was witnessed by both the Ministry of Labour and Taoyuan city government, where Taiwan's international airport is located.

According to the Taoyuan Flight Attendants Union, the strike will end tomorrow at midnight.

Other details about the compromise reached were not immediately available.

Taiwan's Minister of Labour Hsu Ming-chun said regulations would be revised in order to create a better work environment.

Eva Air management apologised to consumers late on Saturday for any inconvenience caused.

Since the strike started on June 20, the carrier has cancelled or scheduled the cancellation of more than 2,200 flights till July 19. 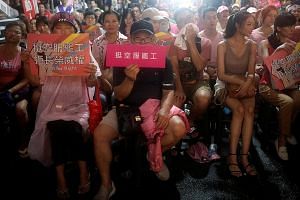 The airline's management said the strike had caused a financial loss of 2.78 billion Taiwan dollars (S$121 million) as of Friday.

The Taiwan News website reported that after the unprecedented 17-day strike, it will take until the end of the month to restore flights to their normal schedules.

The longest strike in Taiwan's history led to the cancellation of 1,440 flights affecting more than 280,000 passengers, it said.

However, because a full resumption of normal flights will be possible only by the end of the month, 2,250 flights have been listed as cancelled until July 19, it said.