TOKYO (AFP) - Yahoo Japan said on Wednesday (Aug 28) it will end the trade of ivory on all its websites from November, after pressure from conservationists.

The decision follows the Internet company's marketplace rivals Rakuten and Mercari adopting a ban in 2017, responding to international concerns that the Japanese domestic market could fuel smuggling through poor law enforcement.

A 1989 ban prohibits international ivory trading but the domestic ivory business remains legal in Japan, with the majority of items sold either from registered stockpiles or predating the ban.

However, some traders in the country have been suspected of dodging the rules.

Yahoo Japan said it made the decision after it confirmed that ivory traded on its auction site - which is among the most popular in the country - was "smuggled abroad and detected by foreign customs authorities".

The company said after careful consideration of the global ivory situation and advice from environmental groups it had "decided to ban the transactions of all ivory products in its e-commerce services from November 1, 2019".

"WWF and Traffic welcome this critical step taken by Yahoo Japan to align themselves with the global efforts to combat illegal wildlife trade online," Mr Crawford Allan, senior director on wildlife crime at the NGO Traffic, said in a statement. 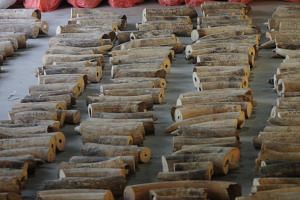 Singapore to ban domestic trade in elephant ivory from September 2021

The sale of ivory is a multibillion-dollar industry, with elephant tusks and other body parts coveted in Asia and the Middle East for ornaments and use in traditional medicine.

China banned ivory sales at the end of 2017 in an attempt to rein in what used to be the product's largest market in the world, and banned imports in 2015.