He also lays out vision on cyberspace governance, in which 'Internet sovereignty' is a central concept

Chinese President Xi Jinping has called for a global treaty on fighting Internet terrorism, amid the growing threat on cyberspace from Middle Eastern terror groups.

He also proposed joint international efforts to combat cybercrimes like drug trafficking, money laundering and gambling, and to formulate "widely accepted" guidelines to oppose espionage, hacking and an "arms race" in cyberspace.

Mr Xi made the proposals in a speech yesterday that laid out his vision on cyberspace governance when he opened the 2nd World Internet Conference in coastal Zhejiang province's Wuzhen town. 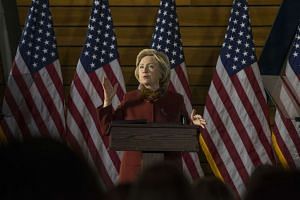 Central to his vision is the concept of "Internet sovereignty", which essentially means that every country has the right to set its own rules on governing its cyberspace.

Likening it to how countries enjoy equal sovereignty rights under the United Nations Charter, Mr Xi said: "We should never seek network hegemony, interfere in other nations' internal affairs and never engage, indulge or support cyber activities that harm other countries' national security."

It was his first appearance at the conference launched last year by China to promote its Internet concepts to counter criticisms of its censorship policies as well as allegations of state-backed Chinese hackers targeting foreign firms.

Besides Internet sovereignty, Mr Xi also listed five principles as crucial in cyberspace governance, such as the need to preserve peace and pursue open cooperation.

Some of his other proposals include the beefing up of Internet infrastructure such as through building faster broadband systems, sharing of foreign cultures through the Internet, and fuelling the Internet economy.

This was particularly as risks of such attacks have increased, given the exploitation of cyberspace by groups such as the Islamic State in Iraq and Syria, said the associate research fellow at the RSIS' International Centre for Political Violence and Terrorism Research.

"But national security concerns could deter countries from cooperating and pose a challenge for China in pushing for the treaty despite the pressing need," said Ms Kam.

Internet issues have gained prominence under Mr Xi's rule since late 2012, with him setting up and chairing a new task force last year within the Communist Party on cyber security and informatisation issues.

The Cyberspace Administration, which was set up in May 2011 under the State Council, China's Cabinet, has also taken on a higher profile, with a crackdown in 2013 on prominent netizens on the Twitter-like Weibo microblog site.

China has often justified its practice of censoring politically sensitive online posts based on the need to maintain social order. It has also often cited the need to stop foreign separatist groups from influencing locals in restive Xinjiang as a reason for cutting or restricting Internet access in the region.

But critics say the tight censorship is aimed more at preserving the Communist Party's control and political stability.

The Economist magazine yesterday also wrote that the Wuzhen conference's title of "An interconnected world shared and governed by all" is misleading.

"The gathering will not celebrate the joys of a borderless Internet but promote 'Internet sove-reignty', a Web made up of sovereign fiefs, gagged by official censors," it said in the report headlined "Online in China: Censors of the world, unite!".

Despite the criticism and cynicism, the Wuzhen conference has gained more traction this year. With more than 2,000 delegates attending, compared with 1,000 last year, the authorities reportedly rejected more than 140 applications from reporters.

Wuzhen has been placed under a virtual lockdown during the three-day conference, with only those possessing an entry permit allowed to move freely.