He debunks talk of 'clash of civilisations', while Trump says he's optimistic about striking deal

Chinese President Xi Jinping has pledged that his country will be even more open to the world and debunked the notion of a "clash of civilisations", even as his country remains mired in a trade war with the United States.

Mr Xi was speaking publicly for the first time after trade tensions escalated over the past week and signs emerged yesterday that China's economy was hurting.

Nevertheless, he said China was an open country that wanted to contribute to building a better world.

"Today's China is not just China's China, it is Asia's China, the world's China," Mr Xi said at the opening of a summit to promote cooperation among Asian countries yesterday.

"The China of the future will take a more open stance and embrace the world."

While his remarks at the Conference on Dialogue of Asian Civilisations did not directly mention the US or the trade war - both countries hiked tariffs on each other's goods over the past week - they seemed directed at US President Donald Trump's "America First" policy.

"If countries choose to close their doors and hide behind them, human civilisation will be cut off from each other and lose all vitality," said Mr Xi.

He also pushed back at the US' framing of their bilateral relationship as that of a clash of civilisations. "It is stupid to believe that one's race and civilisation are superior to others, and it is disastrous to wilfully reshape or even replace other civilisations," said Mr Xi.

The tensions come amid a rough patch for the Chinese economy. Beijing yesterday reported surprisingly weak retail sales for April, with the 7.2 per cent growth from a year ago being the lowest in 16 years. 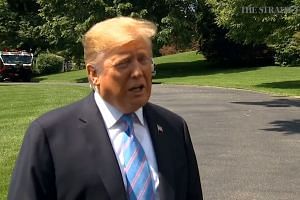 The numbers indicated that Chinese consumers were increasingly worried about the economy even before the US imposed higher tariffs last week, analysts said.

Washington had raised tariffs to 25 per cent on US$200 billion (S$274 billion) worth of Chinese goods last Friday, up from 10 per cent previously. China retaliated by announcing on Monday that it would raise tariffs on US$60 billion worth of goods, with rates varying between 10 per cent and 25 per cent.

Meanwhile, Mr Trump held out hope that both sides could still reach a deal despite the impasse, calling the trade dispute "a little squabble" and saying China wanted to make a deal.

"I think it is going to turn out extremely well. We are in a very strong position," Mr Trump told reporters at the White House on Tuesday.

"Our economy is fantastic; theirs is not so good. We have gone up trillions and trillions of dollars since the election; they have gone way down since my election."

While both sides have not set a specific date for further talks after discussions ended without a deal in Washington last week, Mr Trump insisted talks had not broken down.

He had previously said he planned to meet Mr Xi at a Group of 20 Summit in Japan next month.

On the back of the American leader's softened tone on the trade war, US stock markets rebounded somewhat, with the Dow Jones Industrial Average, S&P 500 and Nasdaq Composite Index ending higher on Tuesday after their rout on Monday following the Chinese tariff announcement.

A version of this article appeared in the print edition of The Straits Times on May 16, 2019, with the headline 'Xi pledges to keep China open in the face of trade war'. Subscribe
Topics:
More
Whatsapp Linkedin FB Messenger Telegram Reddit WeChat Pinterest Print Purchase Article Copy permalink