Chinese President Xi Jinping has ordered the country's military to be ready for battle and prepare for military conflict, even as Taiwan President Tsai Ing-wen yesterday made a call for international support to defend the island's democracy.

"The world is facing a period of major changes never seen in a century and China is still in an important period of strategic opportunity for development," he was reported as saying.

He stressed that the military needed to deepen planning and preparations for war and battle, in order to ensure that if situations arose, it would be able to quickly and effectively deal with them, state news agency Xinhua reported.

Mr Xi's comments came just days after he remarked that China reserved the right to use force to achieve reunification with Taiwan, even as it strives to achieve this goal via peaceful means.

He had said then that reunification with the self-ruled island, which Beijing regards as a renegade province, was inevitable.

His latest comments to the CMC also come amid escalating tensions with the United States over issues including Taiwan's status and trade.

The world is facing a period of major changes never seen in a century, and China is still in an important period of strategic opportunity for development.

CHINESE PRESIDENT XI JINPING, on the increasing risks and challenges that China is facing, adding that the military needs to deepen planning and preparations for war and battle.

Last Friday, Xinhua reported that Mr Xi - who is also chairman of the CMC - called on the military units to "correctly understand major national security and development trends, strengthen their sense of urgency, crisis and battle, and firmly do the work of preparing for military conflict".

He also signed off on the CMC's first order of 2019 to launch the start of a year of military training.

Since Ms Tsai, who is from the pro-independence Democratic Progressive Party, became Taiwan's President in 2016, Beijing has been increasing pressure on the self-ruled island.

It suspects that Ms Tsai wants to push for Taiwan's formal independence, which is a red line for Beijing.

"We hope that the international community takes it seriously, and can voice support and help us," Reuters reported Ms Tsai as saying, as she addressed China's threats to use force to bring Taiwan under its control.

Yesterday, the South China Morning Post reported that Ms Tsai was asked if her administration would want talks with Beijing. 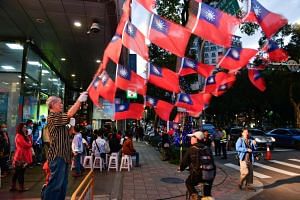 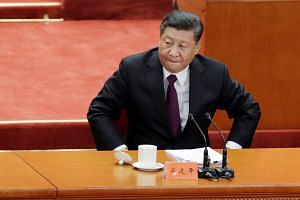 She responded by saying Taiwan did not oppose talks, but Beijing must "move towards democracy, protect human rights and renounce the use of force against us".

Shanghai-based military expert Ni Lexiong told The Sunday Times that Mr Xi's speech to the CMC was another clear sign to Taiwan of Beijing's firm position on the issue of reunification.

"This is an important moment and China wants to show that its attitude is firm and clear," said Mr Ni.

Beijing-based security analyst of Beihang University, Professor Wang Xiangsui, noted that since assuming the chairmanship of the CMC in 2012, President Xi had made repeated orders for the People's Liberation Army to raise its combat-readiness.

This was a response against the increasing security challenges facing China, including the United States' view of the country as a strategic competitor and the goal of reunification of the country.

He noted that Taiwan still thinks it can resist reunification with military force and has been buying military equipment to maintain the balance with China.

"So (for Mr Xi) to give these commands to the military, is a natural response to these challenges posed by Taiwan," said Prof Wang.