BEIJING - China's top leader has hit back at the view that his country's rivalry with United States is one of a clash between civilisations, a view that was floated recently by a senior US official.

Speaking at the opening ceremony of a summit in Beijing to promote cooperation among Asian countries on Wednesday (May 15), Chinese President Xi Jinping said all civilisations were unique, and no one civilisation was superior to another.

"The thought that one's own race and civilisation are superior, and the inclination to remould or replace other civilisations are just stupid. To act them out will only bring catastrophic consequences," he said, to applause.

Mr Xi's rebuke of US State Department director of policy planning Kiron Skinner, who said at a think tank event last month that the rivalry with China is the first time the US is facing a great-power competitor that is not Caucasian, is the latest push back from Beijing against such a view.

Ms Skinner had framed US-China rivalry as "a fight with a really different civilisation and a different ideology".

Mr Xi said: "If human civilisations are reduced to one single colour or one single model, the world will become a stereotype and be too dull a place to live in. What we need is to respect each other as equals, and say no to hubris and prejudice."

His comments at the Conference on Dialogue of Asian Civilisations (CDAC) come amid escalating tensions with the US, after trade talks with Washington broke down last week. 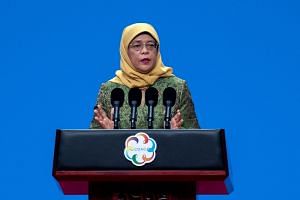 Beijing has framed the breakdown as due to what it called unrealistic US terms that harmed China's sovereignty and dignity.

Calling on countries to come together to promote interaction, dialogue, harmony and economic globalisation, Mr Xi said China was willing to work with them to "protect Asian cultural heritage, and better preserve and sustain our civilisations".

He added that in his travels, he has been fascinated by diversity of civilisations.

"We need to deepen understanding of the difference between one's own civilisation and others, and work to promote interaction, dialogue and harmony among civilisations. In the many places I have visited around the world, what fascinates me the most is civilisations in their rich diversity. I cannot but think of the Central Asian city of Samarkand, the Luxor temple in Egypt, Sentosa in Singapore, Wat Phra Kaew in Bangkok and the Acropolis in Athens, to mention just a few," he said.

The inaugural CDAC conference is being held just weeks after the Belt and Road Forum, the summit on Mr Xi's marquee foreign policy strategy. It is Beijing's latest effort to position itself as a leader in global governance.

The one-day event, which features discussions on issues including Asian governance, education and culture, is being held alongside various cultural events.

Mr Pavlopoulos echoed Mr Xi's comments and said it was a "great mistake" to believe it was possible to have a clash of civilisations.