WUHAN (AFP) - The receptionist's seat is empty, the five-star hotel's restaurant is no longer serving customers and staff flee at the sight of any guests.

Welcome to the Marco Polo in Wuhan that is haunted by the spectre of the deadly novel coronavirus that has infected nearly 6,000 and originated in this central Chinese city.

Wuhan and its 11 million residents - plus anyone who was visiting - are now cut off from the rest of the world, quarantined until the government in Beijing can get a handle on the outbreak.

The luxury Marco Polo is one of the few hotels to have remained open as the crisis erupted, despite fears about human-to-human transmission.

But the minute you set foot in the hotel on the banks of the Yangtze River, it's clear that this is not business as usual.

The lobby desk is unstaffed and the silence is eerie - a strange contrast with the brightly coloured Chinese New Year decorations celebrating the Year of the Rat.

The usually bustling, modern hotel is more or less empty, and the staff struggles to combat sheer boredom - when they're not confined to a room for mandatory periods of rest.

To keep active, the staff engage in group exercises at 10am daily to try and stay healthy.

"After doing it, we feel much more relaxed," said hotel employee Zhu Juhua.

"This kind of activity can enhance our physical resistance as well as our mental resistance," said another worker Xiao Fan.

The threat posed by the virus has prompted some changes in usual behaviour at the high-end hotel.

All guests must wear face masks on the property, and whenever anyone goes out, they are looked upon with the utmost suspicion.

Every time someone enters or leaves the hotel, a security guard checks his or her temperature for any signs of fever.

Wuhan virus: From temples to Disneyland, China shuts down to halt spread

"If it is higher than 37.3, we will take necessary measures."

Adding to the sense of fear, an ambulance took a child suffering from fever out of the hotel earlier this week.

Guests are asked to fill out forms explaining their movements.

One of the questions asks: "Have you been in contact with anyone infected with the coronavirus in the past two weeks?" - a reference to what is believed to be the maximum incubation period.

The Marco Polo has 356 rooms, and is usually about 80 per cent full during the busy Chinese New Year period, an employee told AFP on condition of anonymity.

But now, only about 20 guests remain, the employee said.

Most of them are simply stranded because the city is under quarantine, with no travel in or out by road, rail or air.

Only two of the hotel's 34 floors currently have guests.

The restaurant is closed to prevent any spread of the illness - although guests can still order room service.

"When I opened the door, the housekeeper set the tray on the floor and fled as if she had seen a ghost," said one guest from Latin America.

Some employees were seen in the hotel's hallways in full protective suits.

"We're all in the same boat... For the health of both guests and staff, we can't take any risks," said another employee, his face hidden behind a mask.

The menu is sparse, and mostly includes just noodles. Each day, the list gets shorter as the hotel's food stash is whittled down, with deliveries cut off.

The Marco Polo staff nevertheless say the cooks have been helping to prepare meals for local hospitals in recent days.

"It's the least we can do right now," said a worker. 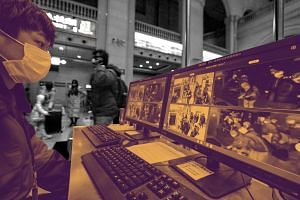 Some hotels in Wuhan are actively trying to push their guests out the door, while others provide minimal service while refusing to take new reservations.

"We're closed," a staff member at the Fairmont Hotel told AFP, even though it is technically open.

The same applies for the Marco Polo.

"We know our current guests but accepting anyone else would be too risky because we don't know if those people might have been in contact with people who are sick," an employee said.

"Of course, we can't close the hotel either because our guests would have nowhere to go."