Mr Malpass made the remarks after a roundtable meeting with Chinese Premier Li Keqiang and the heads of other global institutions, including the International Monetary Fund and the World Trade Organisation.

"I encouraged new reforms and liberalisation," he said.

Beijing is struggling to kick-start the economy, which expanded at its slowest pace for nearly three decades in the third quarter amid cooling global demand for its exports and a looming debt crisis at home.

Mr Malpass said Beijing must resolve bilateral trade disputes and improve transparency in lending to avoid a sharp downturn on growth over the coming decades.

"China could improve the rule of law, allow the market to play a more decisive role in allocating resources including debt and investment, reduce subsidies for state-owned enterprises... and remove barriers to competition," he said.

"It is hard to achieve but it is vital for reducing any inequality and building higher living standards," Mr Malpass said.

State-owned behemoths dominate lucrative sectors of China's economy - including energy, aviation and telecommunications - where access to private players is restricted.

China's trade partners have also long complained about the lack of an equal playing field and theft of intellectual property. 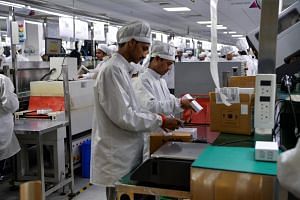 Pain from US trade wars a key topic at IMF, World Bank meet

The country's rubber-stamp Parliament in March passed a foreign investment law that promises to address these issues, but local governments are still working on detailed rules needed to implement it.

Mr Li said both domestic and foreign companies registered in China will be treated equally.

"They will have equal access to investment opportunities, equitable access to resources, legal protection in accordance with the law," he said.

Beijing has also announced a timetable to open up its financial sector to foreign investors next year, as it attempts to woo outside capital to shore up an economy battered by the trade war with the United States.

China and the US have slapped tariffs on over US$360 billion (S$490.54 billion) worth of goods in two-way trade.

Negotiators from both sides have been working towards a partial deal, but US President Donald Trump on Wednesday said Beijing has not made sufficient concessions, making him reluctant to conclude a bargain.

Economic data shows the uncertainty created by the trade spat between the world's two biggest economies is undermining global growth.

IMF chief Kristalina Georgieva warned that implementing all the announced tariffs would cut US$700 billion out of the world economy next year.

"What should be our priorities? First, to move from trade truce to trade peace," she said.