WASHINGTON - Accusing North Korea of "begging for war", the United States is drafting a UN Security Council resolution mandating more sanctions against Pyongyang and will put it to the vote next Monday (Sept 11).

According to reports, the new resolution - likely to be negotiated with US allies, and China and Russia in the intervening days - may among other things target sectors like textiles, labour exports and financial institutions, and oil exports to North Korea. Some experts have been recommending that North Korea's state-owned Air Koryo airline should be sanctioned.

Oil is essential for North Korea; analysts estimate the country would grind to a standstill in a few months if supplies were cut off - though that would also create immense hardship for innocent North Koreans.

On the other hand a complete ban on oil is difficult to envisage or implement. China is North Korea's primary source of oil, and has already been reducing its exports. China is unlikely to cut supplies entirely for very long as that would create instability in North Korea.

Meanwhile Russia, whose relations with the US have almost reverted to Cold War-era hostility, has reportedly been making up shortfalls by exporting oil to North Korea.

"A new resolution could prohibit North Korea's export of labour, requiring that all the essentially slave labour be sent home; it could ban North Korea from exporting food; and it could impose a fuel ban," Joshua Stanton, a Washington, DC-based attorney and expert on sanctions on North Korea, told The Straits Times. 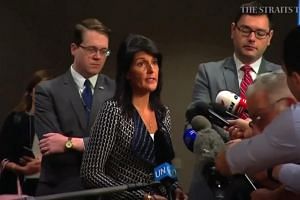 In a strong statement at an emergency session of the UNSC on Monday morning, the US's Ambassador to the UN Nikki Haley insisted: "We must now adopt the strongest possible measures. Kim Jong Un's action cannot be seen as defensive."

The session came just over a day after Pyongyang successfully tested what it called a "missile-ready" hydrogen bomb - its most powerful nuclear test yet.

"We have kicked the can down the road long enough. There is no more road left."

Anthony Ruggiero, a sanctions expert and Senior Fellow at the Foundation for Defense of Democracies in Washington, told The Straits Times: "I'm optimistic on sanctions, but I'm pessimistic on additional UN sanctions only because we've got to the point where we know what the problem is, which is Russian companies and individuals and in the case of China, Chinese banks that are facilitating North Korean sanction evasion."

"I cannot envision a scenario where China and Russia allow their own companies and individuals to be sanctioned by the UN," Mr Ruggiero said.

Eventually, analysts say, it would devolve to the US and its allies to vigorously implement sanctions. UN sanctions are not self-executing; member states are obligated to use their domestic laws to enforce the resolutions.

"The focus now has to shift to enforcing the sanctions we already have," Mr Stanton said.

"UN sanctions are only the foundation, it's an important part of the house but it's not the only part," Mr Ruggiero said. "On top of it has to be US sanctions, and diplomatic efforts to build a like minded coalition that will move the ball forward."

In an email bulletin on Monday soon after the UN Security Council session concluded, the International Crisis Group (ICG) wrote: "The unanimous passage of another UN Security Council resolution would be welcome, but - as evidenced by Pyongyang's response to the last such step - clearly insufficient."

"A more coherent, united diplomatic approach is needed to complement steps to deter North Korea, given the apparent inability of outsiders to force Pyongyang to step back from its goal of militarising its nuclear capacity."

"The focus ought to be on unified deterrence and diplomacy, in particular reaching agreement on the principle of initiating talks with Pyongyang, even at the price of controversial concessions such as removing any precondition or barrier to negotiations. There is no other viable way forward," the ICG concluded.