In a sign of warming ties, the opening of the 2018 Pyeongchang Winter Olympics saw a grinning South Korean President Moon Jae In shaking hands with smiling North Korean "princess" Kim Yo Jong, as athletes from both countries marched together under a reunification flag in sub-zero temperatures.

The event will be watched closely for hints of change in North Korea's nuclear stance, and if the reclusive regime is willing to return to negotiations after raising tensions with rampant missile and nuclear tests over the past two years.

While Pyongyang has made it clear that it is not "begging" for talks with the US, analysts are still waiting to see if Ms Kim, the younger sister of North Korean leader Kim Jong Un, will bring a direct message from her brother.

Ms Kim, believed to be 30, is the first in the ruling Kim family to set foot in South Korea since the two countries were separated by the 1950-53 Korean War.

Mr Moon is expected to hold a luncheon meeting at the presidential Blue House today with Ms Kim and members of a North Korean delegation, in the highest-level contact between the two Koreas in years. He has been pushing for dialogue with the North in a bid to break the nuclear impasse over the past decade.

The US and Japan have both raised concerns about North Korea hijacking the Winter Olympics and undermining South Korean efforts to organise the Games. 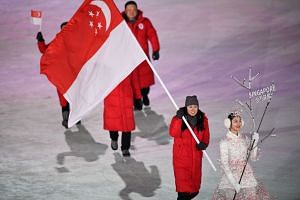 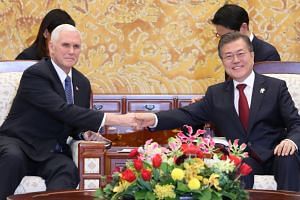 At Games reception, a hopeful dessert and a hasty exit

Mr Pence, who avoided direct contact with North Korea's ceremonial leader at a reception dinner hosted by Mr Moon last night, said the US will continue to exert maximum pressure on Pyongyang until it returns to the negotiating table to discuss permanent and irreversible denuclearisation.

Mr Moon, however, maintains it is necessary to keep engaging the North, so as to create an opportunity to resume broader talks to end Pyongyang's nuclear programme.

He has also asked Mr Abe, as well as other world leaders, for support in inter-Korean dialogue. Mr Abe shook hands and spoke briefly with North Korea's Mr Kim during the dinner reception. It marks a rare communication since 2004, when Japan's then-Prime Minister Junichiro Koizumi visited the North.

Experts remain divided on whether North Korea's participation in the Winter Olympics will lead to any meaningful change in the Korean Peninsula.

Some analysts maintain that Mr Kim Jong Un, who extended an overture to improve inter-Korean ties during his New Year's Day speech, is only trying to drive a wedge between South Korea and the US.

Dr Go Myong Hyun of The Asan Institute for Policy Studies think-tank, however, said the Winter Olympics marks a "turning point in South Korea's relations with North Korea". But he warned that it could come at a price of deteriorating ties with the US and Japan, both of which maintain a hardline stance against the North.

"All eyes are focused on Kim Yong Nam and Kim Yo Jong... if she would invite President Moon to Pyongyang," he told The Straits Times.