TOKYO (BLOOMBERG) - President Donald Trump has spent a lot of time trying to convince Kim Jong Un that great wealth awaits if he gives up his nuclear weapons and opens North Korea's economy. Yet that carries big risks for the young leader.

While Mr Kim's calls for relaxing the sanctions cutting off North Korea from the global economy helped sink talks with Mr Trump last month, it remains unclear whether he wants to follow other Asian tigers like Singapore and Vietnam and welcome a rush of foreign investment.

That's especially true if that means giving up his nuclear weapons - the regime's so-called treasured sword.

"North Korea sees foreign businesses as the carrier of a highly contagious germ that could infect workers," said Dr Andrei Lankov, a director at the Korea Risk Group consulting firm, who has studied in North Korea and written extensively about the country.

Openness could bring in a flood of outside information that finally loosens Mr Kim's grip, Dr Lankov added.

The failure of Mr Trump's second summit with Mr Kim shows the limits of the US's economic appeal in nuclear talks.

Test-launching a rocket or missile - something satellite imagery suggests Mr Kim may be planning - would only drive home the point that he still sees his nuclear deterrent as more valuable than the investment opportunities on offer.

North Korea became one of the world's poorest countries after decades of economic mismanagement, an island of futility in a region comprised of powerhouses China, Japan and South Korea.

The country's annual car production equals the amount that South Korea churns out in about 7.5 hours.

In Hanoi, Mr Trump touted Vietnam as an economic example of what North Korea could become.

Both a communist nation and a former US adversary, Vietnam now boasts one of Asia's fastest growth rates.

US National Security Adviser John Bolton said last week that North Korea had a choice between a "bright economic future" if it disarmed or tighter sanctions if it didn't.

But Mr Kim wants to develop North Korea's economy on his own terms, without giving up a nuclear deterrent that took generations to build or loosening his grip over one of the most repressive regimes on Earth. 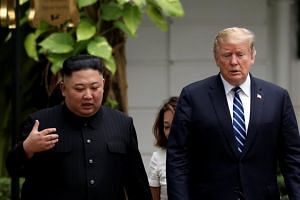 Even foreign investment on a level tolerated by North Korea's socialist peers could prove too destabilising for Mr Kim.

"It's about control," said Dr Mike Green, a former Asia director at National Security Council under President George W. Bush who's now at the Centre for Strategic and International Studies in Washington.

"There's no evidence to support the assertion that Kim Jong Un wants to become the next Vietnam or China any more than his father or grandfather."

The challenge of rebuilding North Korea's ageing infrastructure would be huge: Its rail lines are in disrepair, its highways are scant and it can't produce enough electricity to light the country at night.

An Egyptian telecommunications giant doing business there can't repatriate its profits. Even companies from the country's economic patron, China, have been burned.

Whether US businesses could eventually profit, as Mr Trump has speculated, is another matter. More likely, firms from adjacent countries South Korea and China would be the first on the ground.

China was the only country South Korean President Moon Jae-in mentioned when cautioning about the need to get in fast if North Korean sanctions are relaxed.

"It's extremely important for South Korea to not miss its timing," Mr Moon told a news conference in January.

Mr Moon had been hoping the Hanoi talks would achieve progress on two frozen inter-Korean projects: a mountain resort and a factory park in the North Korean border city of Gaeseong operated by South Korean firms.

The complex, which was supposed to be a model of economic cooperation for a unified Korea, was shut down due to political acrimony about three years ago.

The sanctions imposed to punish Pyongyang for its pursuit of nuclear weapons and missiles severely restrict commerce with North Korea, the import of technology and oil as well as access to global capital.

One model that might be more attractive to Mr Kim is the Middle East, where families enrich themselves while still opening up to international investment, according to Mr Richard Fenning, chief executive officer of Control Risks Group.

"What the North Koreans understand above all else is that countries are at their most vulnerable when they start the process of reforming," Mr Fenning said.

"He knows that what he wants to achieve economically is a baby step compared with what President Trump is trying to demonstrate to him is on offer."