WASHINGTON (AFP) - The White House on Monday (Feb 26) said a decision that could see Chinese leader Xi Jinping rule for life was an internal matter for the authorities in Beijing.

"I believe that's a decision for China to make," said spokeswoman Sarah Sanders, after the country's Communist Party called for the removal of presidential term limits.

"The president has talked about term limits in a number of capacities during the campaign and something that he supports here in the United States, but that's a decision that's up to China."

Trump has previously expressed the need for term limits for lawmakers.

Xi has long been seen as the most powerful Chinese leader of the last three decades, but with this latest consolidation of power, he could well rival Mao Zedong and is well poised to define US-China relations for decades to come.

The guarded US reaction reflects that reality, but also Trump's long-standing reluctance to criticise undemocratic regimes and his delicate relationship with Xi, with whom he has claimed a "quite extraordinary" personal relationship.

Despite that bonhomie, the two leaders have sparred over trade and Trump's bellicose statements on North Korea. 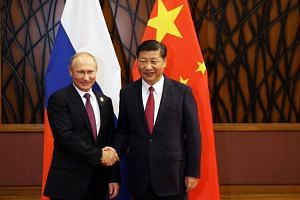 Like Washington, China has been angered by Kim Jong Un's provocative behaviour. But it has also been wary of economic pressure that could bring the collapse of the Pyongyang regime.n