The deadly crash of a People's Liberation Army Air Force (PLAAF) military plane in Guizhou province last month during a training exercise has raised questions about whether China's relentless push for military modernisation has outpaced its actual capabilities.

The incident, which claimed the lives of at least 12 crew members onboard, has severely hit air force morale, as it happened just weeks after the crash of a J-15 aircraft carrier-based fighter jet, a source told the South China Morning Post.

"We must recognise that in China, there is a fatal gap between the air force's combat-ready training and its imperfect aircraft development," the source said.

Despite engine and aircraft design problems, pilots have been pushed to fly the warplanes "because there is this political mission to build a combat-ready fighting force", explained the source.

The crashes are the latest in what appears to be a growing string of often-fatal accidents involving China's military planes.

While the PLA does not openly report such incidents, there were at least seven known crashes in the last two years, including one last November that killed Ms Yu Xu, one of China's first female fighter pilots.

But rather than a sign of deteriorating capabilities, military experts told The Straits Times the accident rate shows a strengthening of PLAAF and its sister branch, the PLA Naval Air Force.

TECHNOLOGY AND CORRUPTION ISSUES AT PLAY

The PLA's air programmes face significant challenges, not least because most of its warplanes are cloned from foreign designs.

While China may have succeeded in cracking design secrets and technical aspects of foreign jets, it is still grappling with cutting-edge jet engine production which requires high-precision manufacturing and deep materials engineering know-how, which China lacks, said analysts.

While China may have succeeded in cracking design secrets and technical aspects of foreign jets, it is still grappling with cutting-edge engine production which requires high-precision manufacturing and deep materials engineering know-how, which China lacks, said analysts.

The use of ageing aircraft, such as the 1990s-era Tu-154, for long-distance maritime missions also shows a lack of confidence in the new models when it comes to longer missions, said S. Rajaratnam School of International Studies research fellow Wu Shang-Su.

A more deep-seated problem is the PLA's graft-riddled past, which has likely compromised the quality of its fighter jet programmes.

Former PLA chief Guo Boxiong was sentenced to life imprisonment in 2016 for having amassed a fortune in bribes.

"As vice-chairman of the Central Military Commission over the past decade, Guo was in charge of R&D (research and development) and reports were that he took 'tremendous bribes' from the defence industry," said PLA expert Arthur Ding of the Taipei-based Chinese Council of Advanced Policy Studies.

"If that's the case, the technology and quality of platforms like jet fighters may not meet the PLA's demands, and this can partially explain why they are suffering this kind of incident rate."

But experts agreed that the biggest contributor to the PLA's rising accident rate is that it has been tasked to take on more varied and demanding missions, alongside a vast expansion in its hardware and numbers. Since last year, the Chinese air force has conducted "island encirclement patrols" around Taiwan involving its fighter jets, bombers and surveillance planes. Such flights are the "new normal", a PLAAF spokesman said in December.

Footage from state broadcaster CCTV in recent months also shows Beijing wants to regularise deployments of combat aircraft in the South China Sea, through the air and naval facilities it has built on disputed islands there, such as on Fiery Cross Reef in the Spratlys and Woody Island in the Paracel chain.

To support the greater range and number of missions, the PLA's air assets have been significantly boosted over the past decade. China had over 700 fourth-generation fighter jets last year, compared to 24 in 1996, the US-based Rand Corporation estimated in a report. The PLA today has almost 3,000 aircraft, about the same number as that of Japan and South Korea combined, said Global Firepower, an index of countries' military strength. 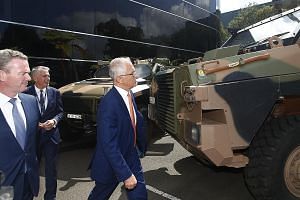 "More aircraft, more personnel, more missions, more training and a higher profile - these are all major factors that account for the incident rate," said Mr Jon Grevatt, Asia-Pacific defence industry analyst for military publication IHS Jane. "One of the outcomes of the increase in these factors is unfortunately more accidents, but that holds true for all militaries around the world."

More accidents in the short term also indicate President Xi Jinping's effort to get the PLA to change its culture is succeeding, said Dr Ding.

Since he took office, Mr Xi has pushed to transform the PLA into a modern military "capable of fighting and winning" a 21st-century war.

Dr Ding noted that in the old days, PLAAF commanders would conduct highly scripted training scenarios that had minimal risk of casualties, unlike real combat scenarios, as casualty rates directly affected promotion prospects. Today's exercises are much more complex, combat-realistic and integrated. Just last month, China conducted a series of training exercises involving the spectrum of its air assets - from the new J-20 fighter to the H-6K bomber and Y-20 transport aircraft.

"My impression is that (President Xi) has encouraged the top brass to face the reality that rigorous training will mean greater likelihood of incidents, and for the PLA, this mindset shift is probably a good one," he said.

But this also means that countries in the region should be prepared for a more formidable Chinese air force in the coming years - one that is able to project air power far beyond China's borders. "It's probably not so good for China's neighbours, because down the road, in the long term, it means China's real combat and operations capability will be substantially improved."