RAUSU (Japan) • People packed the decks of the Japanese whale-watching boat, screaming for joy as a pod of orcas put on a show - splashing tails at each other and leaping out of the water.

In Kushiro, 160km south of Rau-su, boats were setting off on Japan's first commercial whale hunt in 31 years. Killed that day were two minke whales, which the boats in Rausu also searched for glimpses of - a situation that whale-watching boat captain Masato Hasegawa, 57, confessed had him worried.

The former fisherman said: "They won't come into this area - it's a national park - or there'd be big trouble. And the whales we saw today, the sperm whales and orcas, aren't things they hunt."

"But we also watch minkes," he added. "If they take a lot in the (nearby) Sea of Okhotsk, we could well see a change and that would be too bad for whale-watching."

Whale-watching is a growing business in Japan, with popular spots from the southern Okinawa islands up to Rausu, a fishing village on the island of Hokkaido, so far north that it is closer to Russia than to Tokyo.

The number of whale-watchers around Japan has more than doubled between 1998 and 2015, the latest year for which national data is available. One company in Okina-wa had 18,000 customers between January and March this year.

In Rausu, 33,451 people packed tour boats last year for whale and bird-watching, up 2,000 from 2017 and over 9,000 more than 2016. Many stay in local hotels, eat in local restaurants and buy local products such as sea urchins and seaweed.

"Of the tourist boat business, 65 per cent is whale-watching," said Ms Ikuyo Wakabayashi, executive director of the Shiretoko Rausu Tourism Association, who added that the numbers grow substantially each year.

"You don't just see one type of whale here, you see lots of them," she said. "Whale-watching is a huge tourist resource for Rausu and this will continue, I hope." 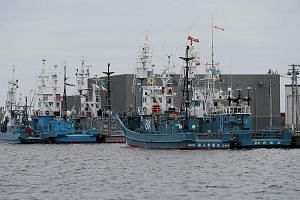 Japan sails into controversy as it resumes commercial whaling

A native of Osaka, she was drawn to Rausu by whale-watching and she fell in love with the area after three trips there to see orcas.

Mr Hasegawa, who said he has a waiting list of customers in high season, has ordered a second boat. "Right now, the lifestyle we have is good," he said. "Better than it would have been with fishing."

Around 300 people are directly involved with whaling around Japan and though the government maintains that whale meat is an important part of food culture, the amount consumed annually has fallen to only 0.1 per cent of total meat consumption.

Yet Japan, under Prime Minister Shinzo Abe - himself from a whaling district - left the International Whaling Commission and returned to commercial whaling on July 1.

"Japan has so much to eat now that food is thrown out, so we don't expect demand for whale will rise that fast," said Mr Kazuo Yamamura, president of the Japan Whaling Association.

A version of this article appeared in the print edition of The Straits Times on July 10, 2019, with the headline 'Whale-watching tours bigger than the hunt in Japan'. Subscribe
Topics:
More
Whatsapp Linkedin FB Messenger Telegram Reddit WeChat Pinterest Print Copy permalink